After Ontario and Quebec, British Columbia is the most important battleground in the country. The province has 36 seats, almost 12% of all seats in the House of Commons. For the last three elections, it has been dominated by the Conservative Party. 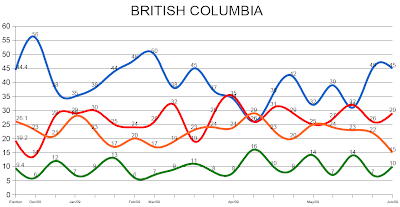 Things are far more competitive in Vancouver and along the Pacific coast. In 2008, the Conservatives and Liberals each took three seats, with five going to the NDP. In 2006, the Tories only took one seat, while the Liberals took six and the NDP four. In 2004, it was again evenly divided, with the Tories and NDP taking three seats and the Liberals taking five. Overall, the region has a slight lean towards the Liberals, who have won 14 seats over the last three elections, compared to 12 for the New Democrats and seven for the Conservatives.

Vancouver Island is even more of a toss-up, but is slightly more favourable to the Tories. They took three seats in 2008 while the NDP took two and the Liberals one. Over the last three elections, the Tories have taken eight seats, the New Democrats six, and the Liberals only four.

Now that the electoral history is out of the way, we can look at the voting trends since December.

The Tories started out the year strongly in British Columbia, holding a clear lead from December to the end of March. Support went as high as 56% (in December) and 50% at the beginning of March. There was a slip in Tory support around the New Year, as the party polled in the high 30s. But neither the Liberals nor the New Democrats were able to separate themselves from the pack, as the Conservative drop coincided with a Liberal and NDP increase to the 20s.

Things changed at the beginning of April, when the Tories and Liberals were tied at 35%-34%. The Tories then dropped even further to third place at 26% (tied with the Liberals). The Greens saw their high-watermark in this poll, at 16%. Since then the Tories have moved themselves back into first place, but their lead is not as clear. While they polled 42% in a late April Ipsos-Reid poll, the party also polled 31% in the massive EKOS poll late last month. The beneficiaries of this Tory instability have been the Liberals, who have moved themselves comfortably into the high-20s, low-30s. This doesn't put them in a position to take the lead, but does put them within striking distance of the Tories when they have a bad poll.

The New Democrats have been stagnant in the high-teens and low-20s, which translates into a big seat loss for them. A downward trend has appeared for them here since the beginning of May, as the NDP has moved from 25% to 15% in a steady decline.

Interestingly, looking at the polling chart you can see that often when the Conservative number is low it is the Greens or the NDP who benefit, not the Liberals. This could just be a coincidence, and a result of, say, Liberals moving to the NDP and Tories moving to the Liberals, but it is a counter-intuitive trend.

As a general conclusion for each of the parties based on the chart, it is clear that the Conservatives have lost a little momentum. They've regained some of it recently, but overall their trend seems to be downward. The Liberal trend is very steady, but is slightly trending upwards. The New Democrats have been steady as well, and appeared to be trending strongly upwards between February and April, but have since started to go downhill. The Greens have maintained themselves between 15% and 5%, which puts them in a good position to repeat 2008's result.

I'm currently projecting the Tories to keep their 22 seats, but the Liberals could reach 12 seats, the highest they've been since the formation of the Conservative Party. I project a disastrous result for the New Democrats with only two seats. Things won't improve for them unless they can get themselves over the 26% mark.
Posted by Éric at 9:44:00 AM