Yesterday's EKOS poll broke things down by age, so I thought it would be interesting to look at the voting intentions of working-age Canadians. These are Canadians between the ages of 25 and 64 - in other words, Canadians that are neither at school nor retired. These are the Canadians with most stake in a government, as they are the majority and they pay the taxes. 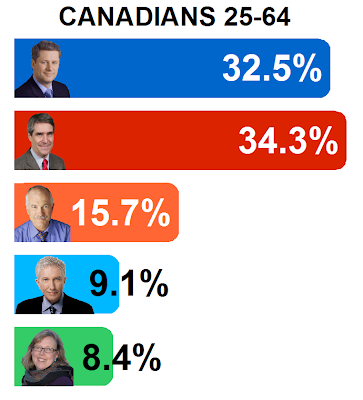 To give the distinctiveness of the Quebec political scene its due, here are the results for that province: 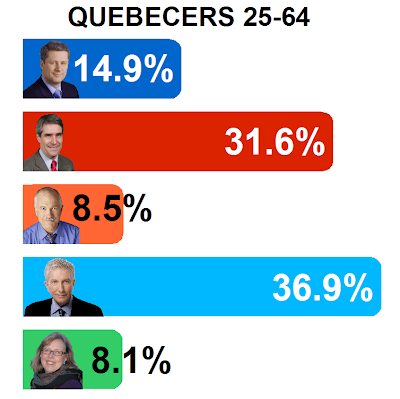 The Bloc polls slightly better among this demographic than they do the whole (about 1.3 points), as do the Liberals by 0.4 points and the Conservatives by 0.1 points. The NDP polls worse, about 1.1 points, as do the Greens, at about 0.7 points below the average.

What can we take from this? The oldest age group tends not to support the NDP or Greens, but the youngest group supports those parties in much greater proportions than older voters. So what we have are the mainstream parties - Liberals and Conservatives in Canada and the Liberals and Bloc Quebecois in Quebec - being supported by the "mainstream" of Canadians. This leaves the idealism of the New Democrats and Greens to the young and the pragmatism of the other three parties to the older age groups.
Posted by Éric at 8:39:00 AM