The Pros and Cons of the Leaders

The Angus-Reid poll released yesterday included a question concerning how each of the party leaders are perceived. People had to choose whether they felt certain qualities were associated with each of the leaders. I've broken them down into two categories: good and bad.

Simple enough. I considered whether the survey takers considered a party leader exciting, down to earth, compassionate, honest, efficient, strong, or intelligent as good qualities, and arrogant, uncaring, boring, secretive, dishonest, inefficient, weak, out of touch, and foolish as bad qualities. I averaged them out, and these are the results I got: 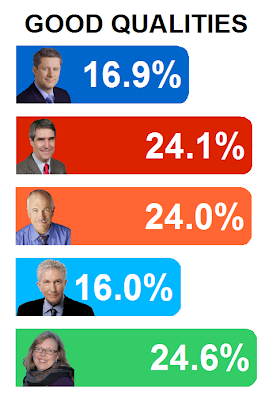 People generally respond best to Elizabeth May, Michael Ignatieff, and Jack Layton. On average, about 24.6% of respondents associated her with good qualities. Ignatieff and Layton were close behind. Stephen Harper was further behind, with only 16.9% of respondents attributing good qualities to him. Only 16% considered Gilles Duceppe to have good qualities. However, I don't consider the Duceppe result all that indicative, as people outside of Quebec are likely to have a negative opinion of him simply because of the party he represents and because they don't know much about him. And really, the opinion people from outside of Quebec have of Duceppe is irrelevant. 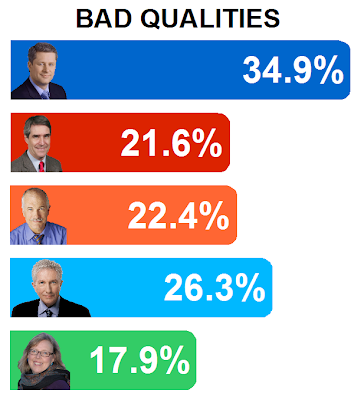 Negative attributes were more strongly associated with Harper, with 34.9% of respondents. This is a much more significant number than those who considered any of the leaders as having good qualities. People react more strongly to Harper negatively than they do any of the leaders positively. Duceppe follows Harper, but Layton is considered to have more negative qualities than either Ignatieff or May, by a slim margin. May is considered to have the least.

The qualities can be broken down even further into five categories. They are general likability, general unpleasantness, being untrustworthy, being competent, and being incompetent.

The first, which groups the qualities of being exciting, down to earth, compassionate, and honest, is the domain of Elizabeth May and Jack Layton. People just generally like them, and attributed these qualities to them more than anyone else.

The second, which groups the qualities of being arrogant, uncaring, and boring, is owned by Stephen Harper. People just don't seem to like him on a personal level.

The third, which groups the qualities of being secretive and dishonest, is also a Harper trait.

The fourth, which groups the qualities of being efficient, strong, and intelligent, is Michael Ignatieff's. He may not be the most likable person, but people seem to respect his competency.

The fifth, which groups the qualities of being inefficient, weak, out of touch, and foolish, is shared by Layton and Harper. Stephane Dion used to corner the market of incompetence, at least in the public eye. And Layton, while liked, hasn't been trusted to run an economy. But now Harper is being lumped in with those who are perceived to be bad administrators, no doubt in response to the record deficit. Harper drew the descriptions of inefficiency and out-of-touchness, while Layton was considered weak and foolish.

Clearly, Stephen Harper has some personal image issues. Michael Ignatieff is respected, but not liked. Elizabeth May and Jack Layton are liked, but not respected. When you look back at the different strategies each of the leaders has used in the past, you can see that they have all come to the same conclusions as I have and have been trying to bridge the gap. The "sweater-vest" campaign advertisements were an attempt to make Harper more likable. Both Layton and May tried very hard during the last election to demonstrate that their parties had real ideas. It would seem that all of these attempts have failed; Harper's ads came off as phony, the Greens made no significant breakthroughs and people openly feared the possibility of the NDP making cabinet decisions.

This leaves one to wonder whether these three party leaders have reached the end of their re-inventability. People have their opinions about Stephen Harper, Jack Layton, and Elizabeth May, and it may be impossible to change them.

Michael Ignatieff is still relatively new, and we haven't seen any attempt by the Liberals to paint their leader as a "regular guy". That could come, and probably will. Whether it will work is another matter. Canadians seem to be pretty good at perceiving their leaders for who they really are, and in my experience will rarely succumb to parties' manipulative attempts to change their opinions.

Parties who do best play to their leaders' strength. People, and parties, can't be someone or something that they simply aren't.
Posted by Éric at 11:07:00 PM