PCs reduced to slimmest of majority in Ontario

Two new polls this week released by Forum Research and Angus-Reid show the Progressive Conservatives on the decline. But the Liberals are mostly staying put at a level of support too low to win on their own, and the New Democrats are starting to push into new heights. This has shifted the projection, reducing the PCs to only 55 seats - one more than is needed for a majority. 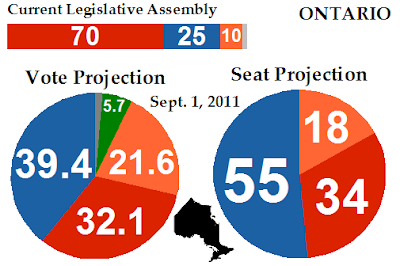 Since the August 19th projection, the Progressive Conservatives have slipped 1.1 points to 39.4% and two seats to 55.

This marks another projection with the Tories on the decline. Back on July 20th, they stood at 61. They have been slipping ever since, allowing the Liberals to climb up from 28 seats to 34.

The Liberals picked up one of their seats in Ottawa and the other in the Hamilton/Niagara region.

The PCs are now projected to take eight seats in Ottawa and eastern Ontario, with five going to the Liberals and one to the New Democrats.

In Hamilton and the Niagara region, the PCs are now tied with the NDP at four seats apiece. The Liberals stand at two.

A lot of seats remain close, with the PCs leading by 5% or less in 20 seats and trailing by that amount in nine seats.

For the Liberals, they hold narrow leads in 10 ridings and trail by a small amount in 19 others, while the NDP is behind by 5% or less in three ridings. 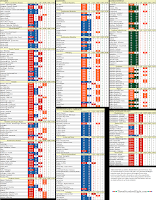 This puts the Progressive Conservative range at between 35 and 64 seats. The upper range has not changed since the August 19th projection, but the floor has dropped by four seats. Only 37% of the PC's range is now in majority territory.

The Liberal range now stands at between 24 and 53 seats, an increase of three seats on the ceiling. The floor has remained the same. The range is now one seat short of reaching the minimum for a majority government. But the potential for a very bad showing still exists.

For the New Democrats, their upper range has now increased by one to 21 seats. That is still short of the Liberals' floor, however.

The number of close ridings in Ontario is huge, compared to the other elections scheduled for this fall. There are eight in Manitoba, two in Newfoundland and Labrador, one in Saskatchewan, and none in PEI. Ontario is the most unpredictable race of the five, and if the Liberal and PC numbers continue to converge the result could really be up in the air.
Posted by Éric at 10:09:00 AM