Earlier this week, The National Post released the details of the latest Forum federal poll, showing that the New Democrats hold a four point lead over the Conservatives. With strong results for the NDP on both coasts, the party is at a level of support that translates into a minority government. 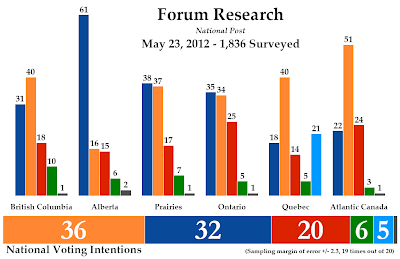 Compared to Forum's last poll of Apr. 24-25, the NDP has remained steady at 36% support. The Conservatives are down one point to 32%, while the Liberals are down two points to 20%.

The Greens are up four points to 6%, while the Bloc Québécois is down one point to 5%.

It has actually been quite a volatile month, with the changes to EI and the focus on Mulcair's Dutch Disease comments. But despite this, the parties haven't much budged.

The New Democrats lead with 51% in Atlantic Canada (+10), 40% in Quebec (-2), and 40% in British Columbia (-4). The result in the Atlantic is the highest I have for the NDP on record. Samples are always small in the region, but it is quite a coincidence if this result is unrelated to the EI controversy, particularly considering the Tories are down seven points here. The NDP is running second by only one point in the Prairies (37%, -3) and Ontario (34%, +3), while they are further behind in Alberta with 16% (-8).

The Conservatives lead in Alberta with 61% (+7), in the Prairies with 38% (unchanged), and in Ontario with 35% (-3). A closing of the gap by six points in that province is quite significant. The Conservatives are second in British Columbia with 31% (-1). 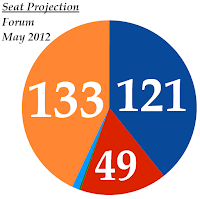 With these numbers, the New Democrats would win 133 seats and likely form a minority government. The Conservatives win 121 seats while the Liberals win 49, with four going to the Bloc and one to the Greens.

The New Democrats win 16 seats in British Columbia, one in Alberta, 10 in the Prairies, 28 in Ontario, 57 in Quebec, 20 in Atlantic Canada, and one in the North.

The Conservatives win 14 seats in British Columbia, 27 in Alberta, 13 in the Prairies, 57 in Ontario, seven in Quebec, two in Atlantic Canada, and one in the North.

The Liberals win five seats in British Columbia, five in the Prairies, 21 in Ontario, seven in Quebec, 10 in Atlantic Canada, and one in the North.

However, Harper still beats out his rivals among own supporters. Stephen Harper has an approval rating of 87% among Conservative supporters, compared to 68% for Rae among Liberals and 67% for Mulcair among New Democrats (though, at 11%, Mulcair's disapproval rating among NDP supporters is lower than Rae's, at 12%, among Liberal voters).

But this poll shows the new electoral coalition that the NDP is trying to construct. Dominance in Quebec, strong results in British Columbia and Atlantic Canada, and enough seats on the Prairies and in Ontario to beat the Conservatives. It is, perhaps, a more unwieldy coalition than the one the Conservatives have put together (Western Canada and suburban Ontario) and less potent, but it gets the job done.

The main sticking point for the Mulcair in this equation is the Liberal Party in Ontario. If the Liberals do well enough to keep the Tories down, it helps the New Democrats win a plurality of seats nationwide. But if they falter and a lot of that support goes to the Conservatives, the NDP is unable to breakthrough in the region they dearly need to: suburban Toronto. The Liberals also have the potential to cause problems for the NDP in Atlantic Canada, where their vote is as inefficient as it is in Ontario. Everywhere else, the Liberals are not a factor.

The Conservatives, meanwhile, merely have to nip-off the centrist, centre-right wing of the Liberal Party to close the gap on the NDP. Those voters in British Columbia and Ontario have a history with the Tories, and can be easily swayed back onto Blue Team. The Conservatives only need a little more support in order to get back on top.

It makes for a very interesting political game of chess. So far, Mulcair's opening moves have put him at an advantage.
Posted by Éric at 10:48:00 AM