A new poll by Angus-Reid for CTV shows that the B.C. New Democrats still enjoy a massive lead over the B.C. Liberals. But with the B.C. Conservatives in free-fall, the Liberals may no longer be in danger of being outflanked on the right. 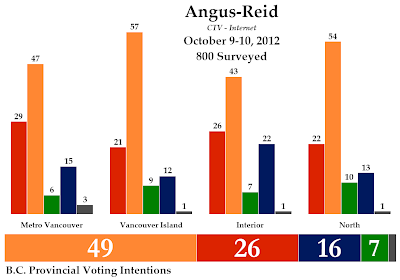 The poll shows that the New Democrats picked up three points since Angus-Reid's last poll of Sept. 10-11, and lead with 49% support. The Liberals gained one point to reach 26% while the Conservatives were down three points to 16%.

The B.C. Greens were down one point to 7% while 2% of respondents said they would vote for another party or independent candidate.

While none of these shifts in support appear to be statistically significant, this poll does fall into line with an emerging trend in favour of the B.C. Liberals. They seem to have moved away from the Conservatives, whose numbers are looking very weak. 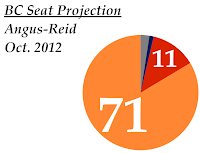 With these numbers, the B.C. New Democrats would likely win 71 seats and form a majority government. The B.C. Liberals would win 11 seats, two independents would be elected, and the B.C. Conservatives would win one seat.

While the Conservatives haven't taken the kind of hit in support that cannot be regained, the numbers for leader John Cummins are especially problematic for them.

Adrian Dix was seen as the best person to be Premier by 30% of British Columbians, up two points since September. Christy Clark was down one point to only 14%, while Cummins was down three points to 6%. If we take out the "none of the aboves" and undecideds, we see that Cummins is in an especially bad position: Dix gets 58%, Clark gets 27%, and Cummins gets only 12%.

The biggest problem is Cummins's approval rating. It stands at only 16%, equal to his party's support. But that represents a drop of six points since December. His disapproval rating has ballooned to 56%, up 11 points. That means that Cummins's net rating has gotten worse by 17 points, a huge change in just one month. Undoubtedly, the dissent within his own party and how he has dealt with it have hurt him considerably.

This is not a horrible poll for the B.C. Liberals, but they seem to be making their gains by default. Christy Clark's personal numbers haven't improved, though John Cummins's have gotten much worse. This would seem to suggest that Clark and the Liberals will be able to recuperate a lot of their lost support from the Conservatives in a campaign - but with the New Democrats at almost 1 in 2 support and Dix's personal numbers being so rosy, the discomfiture of Cummins is unlikely to save Clark alone.
Posted by Éric at 11:48:00 AM