Who will replace Charest?

The race for the Liberal leadership is heating up, and I'm not referring to Justin Trudeau. The Quebec Liberals are running the equivalent of a shotgun leadership race, as they hope to install their new leader by February 2013. Three candidates have already emerged, and together they have the support of a large part of the PLQ caucus.

A poll from Léger Marketing for Le Journal de Montréal gauged what Quebecers think about the race in its earliest days (it has yet to be officially launched) and found that one of the three candidates is the clear favourite of people in the province as well as supporters of the PLQ: Philippe Couillard.

Couillard will announce today his candidacy, joining Raymond Bachand and Pierre Moreau who have already announced their intentions to run. All three are former cabinet ministers, with Couillard having been the Health Minister, Bachand the Finance Minister, and Moreau the Transport Minister. Couillard held the job from 2003 to 2008, when he resigned as an MNA. Both Bachand and Moreau survived the last provincial election. 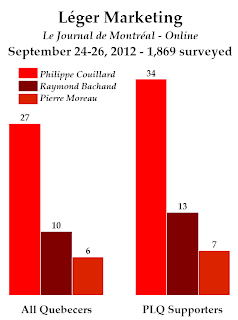 According to the Léger poll, 27% of Quebecers think that Couillard is the best candidate to take over the Liberal leadership, compared to 10% who said the same for Bachand and only 6% Moreau. The poll also included former Education Minister Line Beauchamp (8%) and Pierre Paradis (6%), but they are unlikely to run.

Among PLQ supporters, Couillard has a larger advantage with 34% to 13% for Bachand and only 7% for Moreau. PQ and CAQ voters also think Couillard is the best candidate.

But some caution needs to be exercised with these numbers. A large proportion of Quebecers do not know much about any of these three candidates. Fully 36% said that they did not know anything about Couillard or enough to form an opinion, while 37% said the same for Bachand. Moreau has the biggest challenge, as 68 of Quebecers (and 71% of Liberal voters) did not know him. And while 51% and 48% of PLQ supporters said that Couillard and Bachand, respectively, were good options as leader, only 22% said the same for Moreau.

Nevertheless, Moreau does have some support within the caucus. He has the endorsement of some nine MNAs, including Pierre Arcand, Julie Boulet, and Robert Poëti. Bachand has the support of four MNAs: Christine St-Pierre, Guy Ouellette, Lise Thériault (who some saw as a good candidate to replace Charest), and Danielle St-Amand.

Couillard, who is considered to have more charisma than his two rivals (especially Bachand), has the advantage of not having been in government for Charest's last term. Bachand, on the other hand, was deeply involved in the tuition fee hikes and Moreau was often used as a bit of an attack dog for the Liberals. Couillard also has good support from caucus, including Sam Hamad, Kathleen Weil, Marc Tanguay, Henri-François Gautrin, and the last Health Minister Yves Bolduc, among others, putting his caucus support in the double-digits. Benoit Pelletier, seen as one of the potential contenders for the leadership, has also given the nod to Couillard.

This kind of support is especially important in the Quebec Liberal race as the leader will be chosen by delegates from each of the province's 125 ridings. Party members will not be directly voting for the leader, meaning organization and organizational support will decide who wins. With strong caucus support in addition to public support, Philippe Couillard looks like the front-runner to replace Jean Charest as the race begins.
Posted by Éric at 9:04:00 AM