Late last week, Harris-Decima released a new poll via The Canadian Press on the Liberal leadership race. The contest is still very much in its infancy (if it has even been born yet) but already the numbers are heavily favouring Justin Trudeau - just as they did for Thomas Mulcair throughout the NDP leadership race. 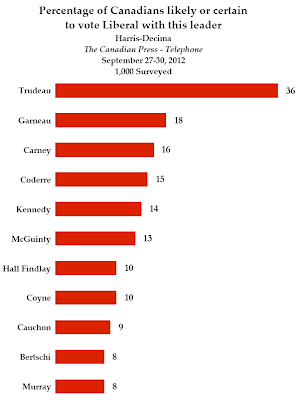 The poll shows that 36% of Canadians would be certain or likely to vote for the Liberals if Trudeau were their leader, a gain of three points since Harris-Decima last asked this question in June. That was double the number of his nearest (and most likely) competitor, Marc Garneau. He managed 18%, unchanged from June.

Based on the latest information, only Coyne, Bertschi, and Murray are good bets at a run against Trudeau and Garneau. Dominic Leblanc had 12% in this poll, but he has already ruled himself out as a candidate.

This poll would seem to suggest that any leader but Trudeau would cause a drop in support as compared to the 2011 election result, but things are rosier when you remove the "undecideds": 43% for Trudeau, 24% for Garneau, 22% for Carney, 21% for Coderre, and 19% for Kennedy. All the others result in a score of less than 19%.

The amount of data in the Harris-Decima report is relatively thin, but Trudeau is able to draw twice as much support from the New Democrats as he is from the Conservatives. Regionally, Trudeau scored 48% certain/likely voters in Atlantic Canada, 43% in Quebec, 40% in Ontario, 29% in British Columbia, 21% in the Prairies, and 14% in Alberta. These are not dissimilar results to the recent Forum poll.

Denis Coderre would get the support of 35% of Quebecers and Marc Garneau 25%, while Carney's best result was 21% in Atlantic Canada.

Not much contest for Trudeau, especially in Quebec where Garneau is not able to do much better than the Bob Rae-led Liberals. Of course, the leadership contest is just beginning and opinion will undoubtedly change as more candidates enter the fray and all of them, including Trudeau, are more thoroughly vetted. This is not about how Canadians would vote in 2015 but how they would vote now - and right now they would give Trudeau every opportunity to earn their support. Canadians might not know much about him yet, but arguably they know more about him than is usually the case for a new party leader. However, these sort of numbers for Trudeau are very near what looks like the Liberal ceiling - it will be a very difficult task to keep support this high if he does indeed win the race.
Posted by Éric at 8:40:00 AM