A new poll by Angus-Reid released by the Toronto Star on the weekend serves to confirm the sort of race that some other polls have pointed to in Ontario - that the Progressive Conservatives and New Democrats are first and second in the province and that the Liberals trail in third. But the Tories' position at the top of the table is not as solid as it may appear. 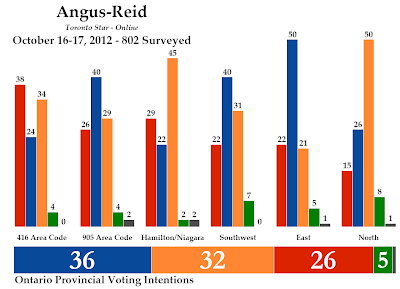 This survey from Angus-Reid is the first from the polling firm since the October 2011 election, so it is impossible to discern any trends from the numbers. But they do seem to fall on the side of Forum and Environics, which have shown the Liberals in third in recent polls, rather than on the side of Nanos, which has seen the race as one between the Tories and the Liberals.

Angus-Reid found that the Progressive Conservatives were in front with 36% support, trailed by the New Democrats at 32%. The Liberals were in third were 26%, while the Greens had 5% support.

This gives each party some pockets of support, more or less in line with where each party was strongest in the 2011 provincial election. But the poll suggests that it is among women that the next election could be won or lost: while men preferred the Tories by a margin of 40% to 32% for the NDP and 22% for the Liberals, women were split three-ways. The New Democrats had the tiniest of edges with 32% support to 31% for the PCs and 30% for the Liberals.

The seat projection model for Ontario is still a province-wide swing model, so the regional numbers are not taken into account. But with the exception of the Hamilton/Niagara region, where the NDP would likely win a few more seats, the regional breakdown is likely unaffected.

With these numbers, the Progressive Conservatives would win a majority with 56 seats, primarily won in the rural and suburban parts of the province. The New Democrats would form the Official Opposition with 33 seats, while the Liberals would win 18 seats, almost all of them in and around Toronto.

But the PCs have been on track for a majority government before, only to lose it. Tim Hudak proved to not be the kind of compelling leader the Tories needed to replace the Liberals, and the problem does not appear to have gone away. While Dalton McGuinty's personal numbers in this survey are very bad (only 23% had a positive impression of him, compared to a 63% negative impression), he is on his way out (a decision supported by 69% of the population, though 66% oppose his decision to prorogue the legislature).

Tim Hudak garners a positive impression among only 26% of Ontarians, little more than McGuinty. His negative impression stands at 44% in this poll, while 30% say they are either not sure or have no impression of him. Those are not good personal numbers for a leader whose party is ahead in the polls. Andrea Horwath's numbers are far better: 49% positive, 22% negative, and 29% no impression/not sure. (Note that the numbers for Hudak, McGuinty, and Horwath are very close to Forum's latest approval/disapproval ratings for these three leaders.) 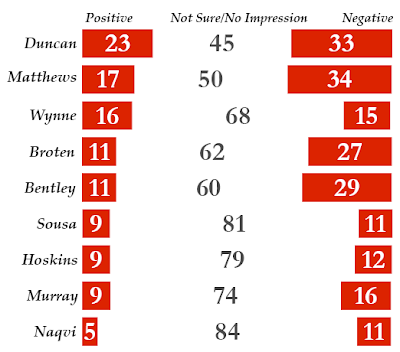 Though this would seem to give an opportunity to the NDP, the Liberals' roster of potential successors to McGuinty does not seem to tilt things in their favour.

A huge swathe of the population has little or no impression of some of the Ontario Liberals' brightest lights, at least in terms of the upcoming leadership race. A majority of Ontarians have a positive or negative impression of only Finance Minister Dwight Duncan - all others have scores of 50% or more on the "not sure/no impression" count.

Duncan's numbers aren't terrific, with a positive score of 23% and a negative one of 33%, though that puts him relatively on par with Hudak. Health Minister Deb Matthews comes second with a positive impression from 17% of Ontarians, but at 34% she has the highest negative score of those listed Liberals. Others who score highly for negative impressions are Education Minister Laurel Broten (27%, to 11% positive) and Energy Minister Chris Bentley (29% to 11% positive).

The best net rating belongs to Kathleen Wynne, who has a positive score of 16% to a negative one of 15%. But that still leaves 68% of respondents on the table, and they could go either way.

Other leadership contenders like Charles Sousa, Eric Hoskins, Glen Murray, and Yasir Naqvi are virtual unknowns to a huge majority of Ontarians. While that does not speak to their ability to win a leadership race, it leaves a lot of room for the opposition to define them if they do come out as the winners. Unlike their federal counterparts, who in Justin Trudeau appear to have someone who could potentially turn the Liberal ship around, the Ontario Liberals apparently have no saviour, hypothetical or otherwise, waiting in the wings.
Posted by Éric at 10:47:00 AM