In a poll released late last week, Forum Research gave The National Post some good headlines by showing that a Justin Trudeau-led Liberal Party would be able to win an election. But in addition to those numbers, Forum also conducted a normal poll and found the Conservatives leading the NDP by five points. 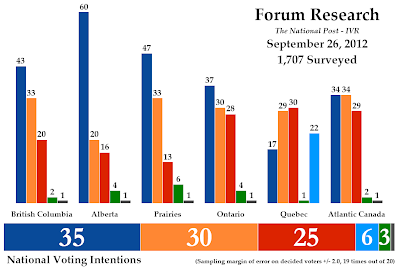 Forum was last in the field Aug. 22 and since then the Conservatives picked up one point to hit 35% support. The NDP dropped four points to 30%, while the Liberals were up three points to 25%.

The Bloc Québécois was unchanged at 6% while the Greens were down one to only 3% support.

The gain of three points by the Liberals and the loss of four by the NDP is statistically significant, as is the lead the Conservatives hold nationwide.

The Conservatives led in Ontario in this poll with 37%, trailed by the NDP at 30% and the Liberals at 28%.

The Liberals narrowly held the advantage in Quebec with 30%, a gain of seven points. This is an odd-ball result, though we have seen signs of some Liberal strength in Quebec in recent polls. At the same time, we have also seen them in the mid-teens. It would seem that the provincial election may be throwing a bit of confusion into the Quebec electorate.

Of note is the very low 2% result for the Greens in British Columbia, representing a drop of six points since late August. In virtually every poll, however, B.C. has been the strongest region for the Greens. This is likely a statistical fluke. With these numbers, the Conservatives would win 161 seats on the proposed boundaries of the new 338-seat map, putting them eight short of a majority. The New Democrats would win 91 seats, the Liberals 75, and the Bloc Québécois 11.

Bob Rae's approval/disapproval rating hardly budged at 31% to 40%, but his approval rating among Liberal supporters dropped 15 points to only 52%. This could be due to the impending leadership race.

Speaking of which, Forum asked respondents of their survey how they would vote if Justin Trudeau led the Liberal Party. The results were striking: the Liberals would take 39% of the vote, while the Conservatives would drop to 32% and the NDP would plummet to 20%. The Liberals would win Ontario with 40%, Quebec with 43%, and Atlantic Canada with 53%, while placing second in B.C. (33%), Alberta (28%), and the Prairies (27%). 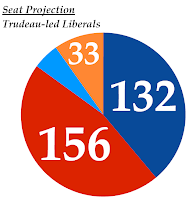 These are dangerous numbers for the Conservatives and New Democrats. This sort of hypothetical poll is based on a lot of assumptions, and there are a myriad of cases of potential leaders polling very well before their numbers come back to earth after they actually get the job.

But the Conservatives lose three points to the Liberals because of Trudeau, while the NDP loses 10 - one-third of their support. Trudeau takes support from both parties everywhere, meaning that he is not only a danger to the NDP but also the Tories.

But there is little meat on the Trudeau leadership bones. What can really be taken away from this poll is just how soft that Conservative and NDP support really is. The Tories don't lose as many votes as the NDP, but about 10% of their supporters are quick to jump ship, suggesting that a good portion of the Conservative voting block is looking for a more moderate option that isn't the NDP. They especially take a hit in Atlantic Canada and British Columbia.

More significantly, the NDP loses one-third of its supporters in the blink of an eye, particularly in Ontario and Quebec. That is hugely problematic, as it suggests that much of their new-found support is based entirely on the party being the more plausible alternative to the Conservatives. With a hypothetical Trudeau leadership, the NDP is pushed back to its pre-2011 levels. It should not be that easy.

Whether Justin Trudeau will actually win all of those voters over to the Liberal Party is another thing entirely. This poll is less about Trudeau's strength than it is about the weakness of the Conservatives and New Democrats. This goes with my view that Canadians are generally fed-up with their political leaders (Ontario and Quebec are two good examples of that) and given the option of something fresh and interesting they can be shaken out of their stupor. If Trudeau wins and turns out to be a politician like any other one, or a complete flop, then Canadians will probably return to the May 2011 dynamic. But if he doesn't, I think that Harper and Mulcair will have a serious problem on their hands.
Posted by Éric at 8:39:00 AM