Another poll for the suddenly fascinating Ontario political scene was released earlier this week, this time by Innovative Research for TVO's The Agenda. The results show a very close three-way race where any party could come out on top. 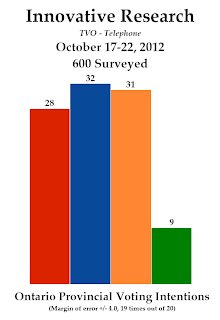 Innovative Research was last in the field Oct. 27-Nov. 2, just after the October 2011 election. Since then, the Progressive Conservatives dropped two points to 32%, the New Democrats were up eight points to 31%, and the Liberals were down 11 points to 28%. At 9%, the Greens registered a five point gain.

Aside from the PC slip, all of these changes in support are statistically significant - though the actual significance of that is difficult to say considering Innovative's last poll is a year old. What is more interesting is that the margin of error is large enough to say that no party is definitively in front. Though the Tories have the edge, their advantage over the third-place Liberals is not even statistically significant. That means a very close race.

In fact, the race would be so close that no fewer than 11 ridings would feature three-way races, where the projected margin for the winner would be less than 10 points over the third place party. That means a very unpredictable outcome. Even the Greens could manage a seat win with these results.

But the model gives the Progressive Conservatives a minority government of 42 seats with these numbers, the seats coming almost exclusively from rural Ontario. The New Democrats win 33 seats while the Liberals win 32, all but six of them in and around Toronto.

Undoubtedly, things will shift as the Liberal leadership race gets underway, and Innovative asked some interesting questions concerning the race. For example, 18% of Ontarians said that they would definitely (8%) or probably vote Liberal in the next election, with 30% "not sure one way or the other". Put differently, that gives the Liberals a base of about 18% but the potential for as much as 48% of the vote.

Innovative then asked about potential successors to Dalton McGuinty. Unfortunately, the apparent front-runner Sandra Pupatello was not included in the list. But coming out on top on whether a leader would make someone a lot or somewhat more likely to vote Liberal was Dwight Duncan, at a combined juggernaut of 13%. The only problem is that he has already said he won't run. David McGuinty, Deb Matthews, and Kathleen Wynne tied with 10% each.

A major problem for the Liberals, though, is that only David McGuinty (and some of that may have been people mistaking him for the Premier) and Dwight Duncan managed a majority of respondents who were able to recognize their names. Matthews had 51% non-recognition, while all others had over 60%.

In terms of who Ontarians prefer as leader, 42% don't have a clue and 26% said that they prefer no one. Of the rest, Duncan and Wynne led with 5%, followed by Matthews and McGuinty at 3% and Jim Watson (current mayor of Ottawa who has already ruled out a run) at 2%. Considering the small sample size, these numbers are hardly informative.

Among "core" and "potential" Liberals, however, Wynne averaged 14%, putting her ahead of Duncan (12%) and David McGuinty (7%). It will be interesting to see how things shift when the full list of candidates becomes known (and polled).

But it does not seem that the leadership race will make a huge difference for the Liberals. If voters' preferred candidate wins the race, it bumps up the proportion who say it would make them a lot or somewhat more likely to vote for the party to only 25%.

The goal, then, will be for the next leader to get as many as possible of those 45% of respondents who thought that the party's policies were good enough back into the Liberal fold. The question is whether too many of them are simply fatigued with the Ontario Liberals.
Posted by Éric at 10:51:00 AM