The first poll to come out of Quebec since the September 4 election shows that little has changed - and that turns out to be better news for the Parti Québécois than for either the Liberals or the Coalition Avenir Québec. 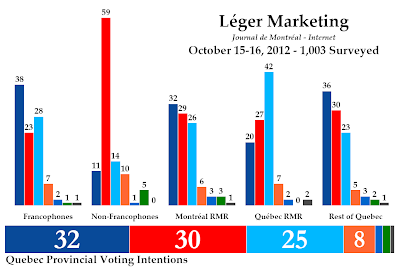 The poll by Léger Marketing for Le Journal de Montréal puts the PQ at 32% support, unchanged since election night. The Liberals trailed with 30%, down a point, while the CAQ was down two points to 25%.

Québec Solidaire was up two points to 8% support, while Option Nationale and the Greens each had 2% support.

Even the regional results mirrored rather closely the results of the election - but not exactly. The PQ had the advantage in the Montreal region with 32% to the Liberals' 29% and the CAQ's 26%, whereas the Liberals had the edge with about 34% to 31% on election night.

And in the rest of Quebec, the PQ was ahead with 36% to 30% for the Liberals and 23% for the CAQ in the poll, compared to their respective scores of 36%, 29%, and 27% on election night. But for smaller regional samples, these are all very close results.

Because of this, the poll probably gives us a good indication of how the vote broke down by language on September 4. Among francophones, Léger gave the PQ the lead with 38%, followed by the CAQ at 28% and the Liberals at 23%. Among non-francophones, the Liberals led with 59% to 14% for the CAQ and 11% for the PQ. 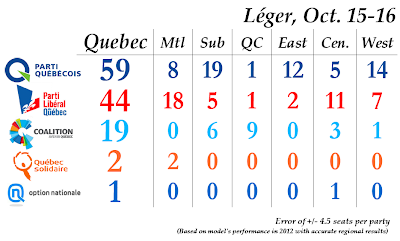 But with the PQ holding steady province-wide while the Liberals and CAQ take a small step backwards, the Parti Québécois expands their minority by five seats. With these numbers, the PQ would likely win 59 seats, with the Liberals being reduced to 44. The CAQ would win 19 seats, Québec Solidaire two, and Option Nationale one.

This would result in a rather split National Assembly, as the PQ, QS, and ON could combine for 62 seats - one short of half.

The Léger poll also shows, however, that the Liberals would have a much better shot with Philippe Couillard as their leader. With him at the helm, the Liberals and PQ would tie with 33% support apiece. The CAQ would suffer the most, dropping to 23%. This is a much better result for the Liberals than with either Raymond Bachand (34% PQ to 27% PLQ) or Pierre Moreau (33% PQ to 25% PLQ) as leader.

Couillard has increased his advantage in the race over Bachand and Moreau in Léger's polling. Among all Quebecers, he is the top choice at 37%, up 10 points since Léger's last poll from late September. Bachand and Moreau were both up four points, to 14% and 10% respectively.

Among Liberal supporters, Couillard was up 14 points to 48%. That gives him a huge lead over Bachand (16%, up three points) and Moreau (12%, up five points). It is still very, very early going, but it is hard to see the Liberal establishment being so out of tune with their supporters as to select anyone other than Couillard with these numbers.

With the Parti Québécois governing in a minority, the next election could be just around the corner. The Liberals will choose their next leader in early 2013, giving them the opportunity to take their shiny new chief on the campaign trail in the spring, if the PQ's budget is voted down. Otherwise, we could be looking at a fall election. In any case, it seems quite likely that Quebecers will be heading back to the voting booths some time in 2013 so ThreeHundredEight will be tracking provincial voting intentions on an on-going basis. You can access the latest averages by clicking on the Quebec image at the top of the right-hand column, though currently this Léger poll is the only one in the calculation.

At this point, things are in a holding pattern. A few more months of PQ government and the PLQ leadership race should shake things up.
Posted by Éric at 12:43:00 PM