Five polls surveying a total of 7,922 Canadians in September found that both the Conservatives and New Democrats took a slip from their August polling. That means that the Tories still hold a narrow lead. 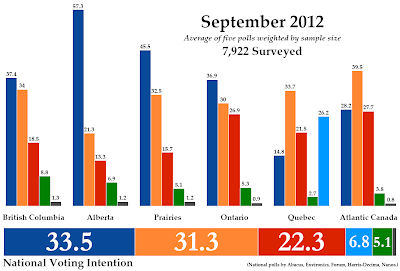 This represents three months of decline for the NDP at the national level.

The most dramatic shifts took place in British Columbia, where the Conservatives picked up 2.4 points to lead with 37.4%. The New Democrats were down 5.7 points to 34%. The two parties have been heading in opposite directions for two consecutive months and this is the first time that the NDP has not led in B.C. since February. The Liberals were up 2.1 points to 18.5% and the Greens were up 0.1 point to 8.8%. 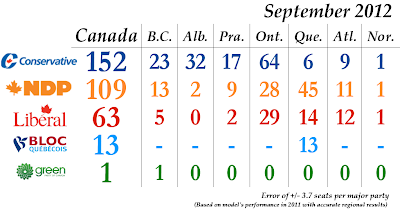 With these numbers, the Conservatives would have won 152 seats in a September election, using the proposed boundaries of the 338-seat map. That is a drop of eight seats from August.

The New Democrats were down 14 seats from their August totals to 109, while the Liberals were up 14 seats to 63. The Bloc was up eight seats to 13 while the Greens would win one.

The Conservatives took a big hit in Ontario, dropping 13 seats to 64. But they made much of that up in British Columbia, where they picked up six seats. The New Democrats were down eight seats in both British Columbia and Quebec, while the Liberals were up 13 in Ontario.

Only one poll had approval ratings out for the leaders, and they showed better results for Stephen Harper and worse results for Thomas Mulcair.

Now that the summer is behind us and the polling will - we can assume - pick-up, we can get a better idea of where Canadians stand. If we look back a year ago, we see that the New Democrats have been holding steady (dropping to 31.3% from 31.5%) but the Conservatives have slid by a considerable amount: they had 39.1% support in September 2011. The Liberals have taken the most advantage over the last 12 months, rising from 19.5% to 22.3%. Regionally, though, the only major difference is that the Conservatives have taken a big hit in Atlantic Canada.

The continuing saga of minority government in Quebec, the Liberal leadership race running through to April, and the increased focus on British Columbia as we near their May election will undoubtedly play a big role in how the federal numbers will move over the next few months. Where will things be in September 2013?
Posted by Éric at 9:58:00 AM