On Friday, the Citizen Society Research Lab of Lethbridge College put out its yearly report on the voting intentions of Albertans. While the results are hardly surprising, they do give us the opportunity to look more closely at how support is divided throughout the province. 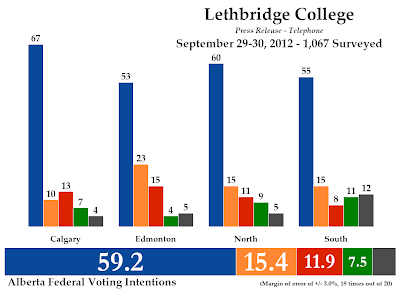 The poll by Lethbridge College is about a month old, despite it having been released only a few days ago. Lethbridge reports on a yearly basis, and compared with October 2011's results the Conservatives picked up 1.5 points to reach 59.2% support in the province. That puts them well ahead of the other parties.

Another 6% of Albertans, a gain of 3.3 points, said they would vote for another party. This is unfortunately high, and on first glance it appears to be the result of respondents saying they would vote for Wildrose. I say this because the best result for the other parties was in southern Alberta (11.7%), where Wildrose has its strongest concentration of support. If most of this "other" support is indeed for Wildrose, we can probably safely assume that those votes would go to the Conservative Party.

But I think pollsters should do a better job of weeding out these sorts of results, especially when they are using live callers (as Lethbridge did). A respondent who says they will vote for Wildrose is simply mistaken - they cannot vote for Wildrose in a federal election. I wrote about the odd results you can get from respondents back in 2010 when it comes to "the Others", and it just seems like a waste to even include them.

Back to the poll: Edmonton is the closest thing Alberta has to a battleground, and the poll suggests that the Conservatives had 52.8% support in the city. That puts them well ahead of the New Democrats, who registered 23.4%. The Liberals were third with 14.5%. This score for the NDP is not good enough to give them more than their one seat of Edmonton-Strathcona, so the Conservatives would likely win all but one of the seats in the province once again with these results.

The Liberals placed second in Calgary with 12.5% support, well behind the Tories' 67%. The New Democrats were third with 9.7%.

Alberta remains the region of Canada most resistant to political change. The New Democrats could make big inroads in the next election in British Columbia, the Prairies, and Atlantic Canada, Ontario remains in flux among all three parties, and the Liberals are shaking things up in Quebec. Meanwhile, Alberta has hardly budged and the only real question at this stage is whether the New Democrats can manage to win a second seat in the province. Nothing lasts forever, though, and it is interesting to think about what it will take to finally move the dial a little.
Posted by Éric at 8:49:00 AM