NDP leads in Quebec, for now

A new poll was released yesterday by CROP via La Presse, indicating that the New Democrats are still in control of the situation in Quebec. But the poll also indicated that the NDP's dominance in the province could be threatened by a Justin Trudeau-led Liberal Party. 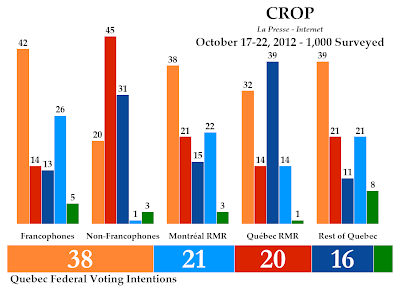 CROP has been out of the field federally for some time, their last poll on record being from April. Since then, the New Democrats dropped 13 points to 38% (they were at 51% in CROP's polling after Thomas Mulcair won the leadership). That still put them well ahead of the Bloc Québécois, which gained three points to reach 21%.

The Liberals were up five points to 20% and the Conservatives were up three to 16%, while the Greens had 5% support.

The New Democrats held a statistically significant lead province-wide, but also among francophones (42% to the Bloc's 26%) and in the Montreal region (38% to the Bloc's 22%). The Liberals held a lead among non-francophones, edging out the Tories with 45% to 31% support. That is actually a bit of a mark against the New Democrats, who have generally been in a race with the Liberals for the favour of this demographic. It puts the NDP in a difficult position on the island of Montreal.

Elsewhere, the Conservatives had the edge in Quebec City with 39% to the NDP's 32%, while the NDP edged out the Liberals and Bloc with 39% in the rest of Quebec. The two other parties were tied at 21% apiece.

The landscape changes dramatically when Justin Trudeau is added to the mix, however. 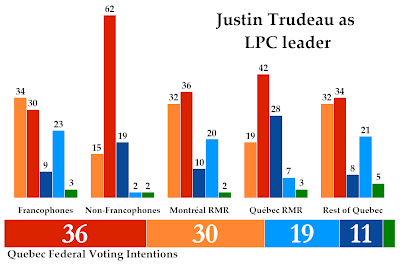 With him at the helm of the Liberal Party, the NDP falls to second with 30% to the Liberals' 36%. That represents a 16 points gain for Trudeau and an eight point drop for the NDP.

The Bloc drops two points to 19% and the Conservatives drop five to 11%, proportionately a larger share of their supporters than the NDP loses to the Liberals.

But the New Democrats would still have the support of francophones, with 34% to the Trudeau Liberals' 30%. With Trudeau's high score among non-francophones, it seems that the Liberals would have most of their Montreal-area support concentrated in the West Island, giving the NDP the advantage in the francophone parts of the island and the out-lying suburbs.

The gains the Liberals make under Trudeau are generally uniform, at between 13 and 17 points in the different regions and among the two linguistic groups. The 28-point gain made in Quebec City, coming almost equally from both the NDP and the Tories, is a little counter-intuitive, however. 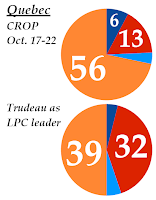 In terms of seats, the current voting intentions would award 56 seats to the New Democrats on the proposed boundaries of the 78-seat map for Quebec, while 13 would go to the Liberals, six to the Conservatives, and three to the Bloc Québécois.

With the Trudeau numbers, the New Democrats would still win a plurality of seats with 39. The Liberals would win 32, the Bloc four, and the Conservatives three. The NDP's edge is due primarily to the francophone suburbs around Montreal.

As I point out in my article for The Huffington Post Canada on this new poll, there is a silver lining for the New Democrats in these numbers. Despite falling behind the Liberals in voting intentions, Thomas Mulcair still tops the list on who is the best person to be Prime Minister with 29% to Justin Trudeau's 25%. This suggests that Mulcair is still seen as the more qualified person for the job, an advantage that could be absolutely vital in an election campaign.

But the Liberals have a lot of wiggle room. A result of 36% would be very impressive for the Liberals after having struggled in the province ever since the Gomery inquiry. But even a result of 25%, better than Stéphane Dion managed in 2008, would be a good rebound for the Liberals in Quebec. It seems quite likely that Justin Trudeau should be able to manage at least that.
Posted by Éric at 2:47:00 PM