Last week, La Presse released the first CROP poll since the Sept. 4 election in Quebec. Though it showed little real change since the vote, the poll does suggest that both the Parti Québécois and Québec Solidaire are in better positions than they were on election night. 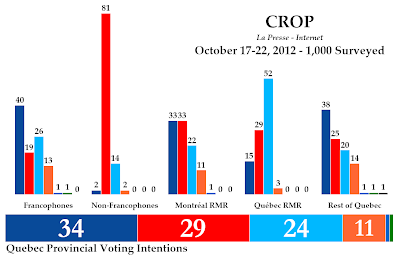 CROP found that support for the Parti Québécois stood at 34%, two points up from their election result. The Liberals were down two points to 29% and the CAQ was down three points to 24%. Québec Solidaire was up five points to 11% support.

It would be incorrect to compare these results to CROP's final election poll, as the firm has reverted to its online panel after using live telephone callers during the campaign. It is not possible to know how this methodological change affects their numbers.

CROP gave the Parti Québécois a lead among francophones with 40% to the CAQ's 26%, and in the regions of Quebec with 38% to the Liberals' 25%. There was little change for the PQ (+2) or the Liberals (-4) in this part of the province, but the CAQ dropped seven points.

The Liberals led among non-francophones with 81%, well ahead of the CAQ at 14%. But François Legault's party led in Quebec City with 52% to the Liberals' 29% - an increase of 14 points since the election that came primarily at the expense of the PQ (down seven points).

The PQ and Liberals were tied at 33% apiece in and around Montreal. Compared to the election's results, there hasn't been any major shift in this region. 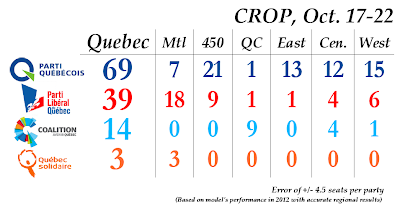 With these numbers, the Parti Québécois would win a majority government of 69 seats, 61 of them coming from outside the city centres of Montreal and Quebec City.

The Liberals would win 39 seats, two-thirds of them in and around Montreal, while the CAQ would win 14 seats, nine of them in Quebec City. Québec Solidaire would win three seats, up one from their current holdings in the National Assembly.

Satisfaction with Pauline Marois's new government stands at only 39%, with dissatisfaction at 55%. That is similar to Léger's recent finding, and while that is low for a new government it is a big improvement over the numbers that Jean Charest was able to put up in the final part of his administration.

Support for independence stood at only 34% in the poll, though 46% of Quebecers said they would vote for sovereigntist parties. In other words, one out of every four supporters of the PQ, Québec Solidaire, or Option Nationale would vote "no" in a new referendum, a rather high proportion. This would suggest that Marois has little to lose by focusing on governing the province, though that is not something that usually goes over well with the rank-and-file of the party.

The PQ may move forward with a budget this fall, rather than risk losing a confidence vote in the spring when the Liberals will have a new leader and the CAQ's position could have improved. At this stage, it is not hard to imagine the CAQ ensuring the PQ's survival, as the party has not taken advantage of the minority situation in the National Assembly just yet. The Liberals might be a little more gung-ho (some reports suggest that they are not in rebuilding mode, but are instead quite keen on a Round Two) but the possibility of a fall election seems incredibly remote. If the PQ can present their budget in the next two months, they have a good chance of surviving for at least another year.
Posted by Éric at 9:29:00 AM