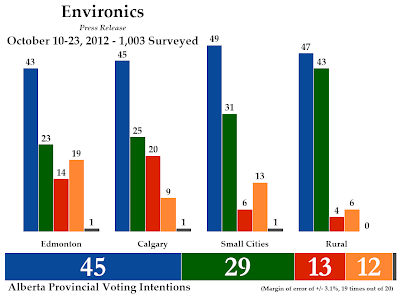 Environics was last in the field Aug. 10-22 and since then the PCs picked up two points, leading with 45% support. Wildrose was up three points to 29%, while the Liberals at 13% and the New Democrats at 12% each lost one point.

None of these shifts in support were outside of the margin of error of this telephone poll. Environics' report on the poll is compact, but thankfully includes the unweighted and weighted samples of their survey.

Alison Redford's Tories led in both Edmonton and Calgary with 43% and 45% respectively, putting them ahead of Wildrose (23% and 25%). The Liberals did better in Calgary than they did in Edmonton, with 20% to 14% support, while the opposite was the case for the New Democrats (19% to 9%). All in all, this is generally what we've seen in Alberta for some time.

The Progressive Conservatives also led in Alberta's small cities with 49%, while Wildrose picked-up nine points to hit 31%. The New Democrats trailed with 13%, while the Liberals were down 12 points to 6% in the province's smaller urban centres (where they hold no seats).

In the rural parts of the province, the Tories were up 10 points to 47%, putting them ahead of Wildrose. Danielle Smith's party fell to 43%. The NDP managed 6% support and the Liberals were down five points to 4%.

As this poll was taken during the month of October, any of the fallout from recent controversy over MLA compensation or the decisions made at the annual general meeting concerning the party's links with the federal Conservatives was not recorded. It is unclear whether any of this will have any effect - the Tories have been comfortably leading in every poll since the last election and, so far, do not seem in danger of losing many of the centrist supporters they attracted in April back to the Liberals.

Wildrose, meanwhile, has a lot of ground to make up. They've lost about 10 points in Calgary and, whereas they were neck-and-neck with the Tories in the last election outside of the two main cities, this poll puts them about 10 points behind. There is no reason for Wildrose to hit the panic button just yet, however, as the next election is scheduled for 2016.
Posted by Éric at 9:41:00 AM