A new poll was released on Friday showing that the Ontario Liberals are in dire straits, no matter who takes over the party. And that means that, for the time being, the real contest is between the Progressive Conservatives and the New Democrats. 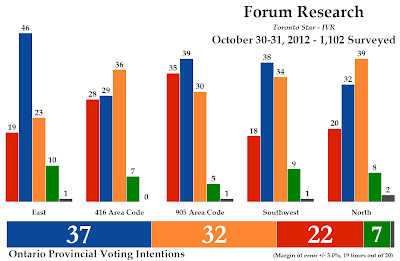 Forum was last in the field in Ontario on Sept. 25, and since then the Tories were unchanged at 37% support. The New Democrats were down three points to 32% while the Liberals were up two points to 22%.

The Greens were unchanged at 7% support.

Whereas the last poll from Forum showed a gap between the PCs and NDP that was within the margin of error, this poll gave the Tories a statistically significant lead. But that significance does not extend to any region of the province except eastern Ontario - all the others are close enough to give us an indication of only who is probably ahead, rather than definitively.

The disparity between men and women in this poll is telling. The Tories held a 43% to 29% lead over the NDP among men but the NDP was up five points (35% to 30%) among women. The New Democrats will need to close the gap among male voters in order to put themselves back in a dead heat with the Tories.

But there is something to note about this poll, similar to what I highlighted in Forum's last federal poll. The real problem is that Forum does not included unweighted and weighted samples in their reports (and they are not alone), which makes it difficult to determine what is actually going on. For instance, Forum says on one of its charts that the number of undecideds in this poll was 13%. But it also says that the total sample was 1,102 Ontarians and that, on the voting intentions question, the sample of respondents was 1,047. If the numbers of undecideds is really 13%, then the number of decided/leaning respondents who answered the voting intentions question should have been 959.

And on the question of how respondents voted in the last election, the numbers are off of the actual results - most strongly for the New Democrats, who were five points below their election result. By my rough calculation of Forum's numbers, if the sample was weighted by past voting behaviour the PC lead would be reduced to three points instead of five. But perhaps Forum is already taking this into account in their final numbers. When I asked if that was the case, I was told that this information is proprietary. That is certainly their prerogative, but it doesn't clear things up much.

Another interesting thing to note is that if you add up the sample sizes of how people said they voted in the last election, you end up with 1,008, or 96% of 1,047. In other words, 96% of respondents said they voted in the last election. That means that the sample Forum compiled either has a lot of fibbers (turnout was 49%) or a lot of forgetful people, and that it is probably not representative of the entire population. It might be representative of the voting population, though.

With the numbers in this poll, the Progressive Conservatives would likely win a majority government of around 60 seats, with strong results in rural Ontario but also a few pick-ups in Toronto as well. The New Democrats would win 37 seats and the Liberals only 10, nine of them in and around Toronto.

The poll also included some information on how Ontarians would vote depending on who was leading the party. Forum reported their numbers with the undecideds still included, but if we remove them we get the following results:

The poll also included Laurel Broten, but she has ruled herself out. What the poll suggests is that only Kennedy would improve the Liberals' current numbers, while they would fall with all of the others. Undoubtedly, this is due to Kennedy being a higher profile candidate. The others on the list are not nearly as well known, but their numbers would likely improve somewhat if they actually became leader.

This leaders question actually shows that the real swing voter in Ontario right now is on the fence between the New Democrats and the Liberals. The numbers hardly budged for the Tories no matter who was on the ballot, but those lower-performing Liberals added to the NDP's tally. It would seem to suggest that the Liberals would do better with a left-wing candidate (like Kennedy or Wynne) rather than one from the right (like Pupatello). But, in the end, if the Liberals get themselves back into a competitive position they will need to win votes from the Tories as well.

As of writing, Glen Murray is the only candidate officially in the race for the Liberal leadership. That list will likely get much longer very soon. How it all plays out between now and January, and then how the new leader will do in the short time before the next election, will be interesting to see.
Posted by Éric at 8:50:00 AM