Forum Research is out with a new Ontario provincial poll today, published in the Toronto Star, showing that the Liberals have made big gains over the last four weeks, almost all of it at the expense of the New Democrats. Is it an outlier or a sign that the Ontario Liberal leadership race is improving the fortunes of the party? 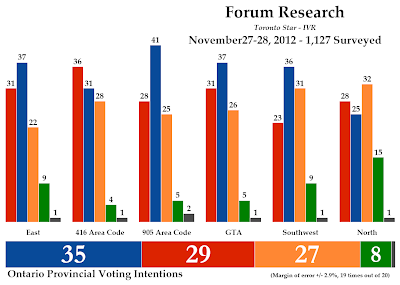 Forum was last in the field Oct. 30-31, and since then the Progressive Conservatives have dropped two points to 35%. That still gives them a statistically significant lead over the Liberals, who were up seven points to 29% support. The NDP was down five points to 27%.

The Greens were up one to 8% and 1% of respondents said they would vote for other parties.

The Liberal gain and NDP drop is outside the margin of error, so this is not due to a statistical wobble. Whether it is an outlier result is hard to say - with the leadership race in the news it is not surprising to see the Liberals making gains. If this sort of result had come from Nanos Research, which has been more bullish on the Liberals in Ontario, then it would potentially be less significant. But coming from Forum, which has had the Liberals at 22% and 20% in their last two polls, this is perhaps more meaningful.

A few notes on methodology: Forum conducted this poll over two days, which they also did the last time they polled in Ontario. I applaud this, as their usual one-day snapshots are more susceptible to error. But, as usual, the report contains no information on unweighted samples. It does contain information on how respondents voted in the last provincial election, with that breaking down to about 40% for the Liberals, 33% for the Tories, and 19% for the NDP. The actual results are within the margin of error of the poll, but this does suggest that there is a potential that the sample is slightly more favourable to the Liberals (and Greens and others) than to the Tories and NDP. Whether that is due to lapses in memory or methodological bias is impossible to say.

The Tories were ahead in most parts of the province, with 37% support in the Greater Toronto Area, compared to 31% for the Liberals and 26% for the NDP (down six points). In particular, the PCs were strongest in the 905 area code with 41%, followed by the Liberals at 28% and the NDP at 25%.

It is worth noting that the Liberals were up in every region of Ontario, while the New Democrats were down across the board. The Liberals had the edge among women by a margin of two points over the NDP, while the Tories were ahead by 15 points among men.

44% of respondents favoured calling an election, compared to 49% who said they were against another election right now. Sadly, 44% might be a good estimation of the next election's turnout.

With these numbers, the PCs would win a minority government of 49 seats, with the Liberals winning 30 and the New Democrats winning 28. But that is a close enough margin to the magic number of 54 seats that a majority government isn't out of the question for Tim Hudak. A continuation of the Liberal government is also theoretically possible, if they could get the support of the NDP.

Forum also included some polling on the Ontario Liberal leadership race, showing little change in what the numbers have indicated so far.

Gerard Kennedy topped the list of favourite choices at 16%, followed by Sandra Pupatello at 10% and Kathleen Wynne at 8%. The other candidates scored 3% or less. Fully 30% of respondents said that none of these were their favourite choice, while 27% were undecided.

Kennedy led in and around Toronto and in northern Ontario, while Pupatello led in eastern and southwestern Ontario. That jives pretty well with the regional distribution of Pupatello's caucus support.

Among Liberal supporters, Kennedy managed 25% to 16% for Pupatello and 13% for Wynne. Removing the undecideds and "none of the aboves" gives 38% to Kennedy, 25% to Pupatello, and 20% to Wynne. The other candidates were well behind.

Though Kennedy beat out his competitors on questions of "who cares most about people like you", the economy, likability, and trustworthiness, his numbers were very similar to his overall support. In other words, that tells us little about why Kennedy is favoured.

It will be interesting to see how the numbers fluctuate as the race firms up a little more. Kennedy is the favourite choice of NDP voters, suggesting that he has the greatest potential to draw supporters away from the New Democrats. If Pupatello is chosen, however, she may have more luck attracting Tories to the Liberal fold, keeping the NDP in the race. Combine that with how the PCs threw away their last chance and the next election is wide open.
Posted by Éric at 10:10:00 AM