The by-elections last night ended up as most by-elections do, with the incumbent parties holding on to their seats. The results in Durham and Calgary Centre went as scripted, with the Conservatives winning the first by a wide margin and the second by a narrow one. Victoria, however, was supposed to be a cakewalk for the New Democrats - instead, it almost gave the Greens their second MP in the House of Commons.

My detailed analysis of the results can be read at The Globe and Mail website. This post will focus more on the forecasts that were made and what each party can take away from the results.

Calling for the incumbent to win is never a risky bet, but the By-Election Barometer continued to have success with its ninth consecutive correct call. The results fell within the forecasted vote ranges for all parties in Durham and Calgary Centre (except for the NDP in the latter), but not in Victoria where the Greens performed unexpectedly well. That is itself a telling result. 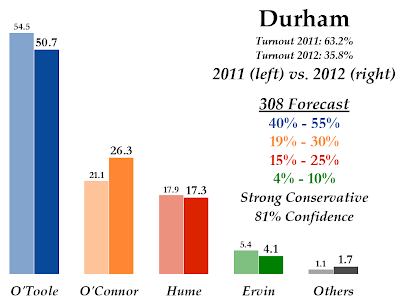 Durham was the easy call last night, as there were few indications that the race was going to be much different than the one in 2011. Erin O'Toole easily won with 50.7% support, down less than four points. That's a performance that is generally in line with what most parties do when they lose an incumbent MP.

The New Democrats did quite well, though, picking up more than five points and distancing themselves from the Liberals, who did about as well as in 2011. While the result of 4.1% for the Greens may not look very good, that is actually not so bad in a by-election - the Greens tend to do very poorly in by-elections when they are not in the running.

The results all fell within the forecasted ranges, and quite close to the median forecast for both O'Toole and Larry O'Connor. The last poll by Forum gave the Liberals more of the Conservative vote, suggesting that some Liberals stayed home or opted for O'Toole when it became clear he would be the winner. Turnout was somewhat low, even for a by-election. 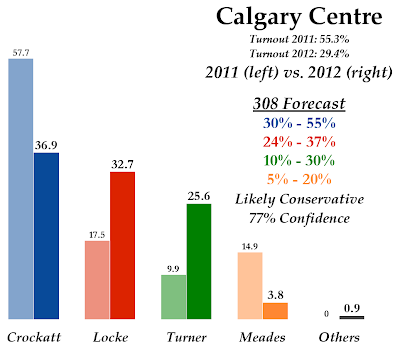 It was not as low as it was in Calgary Centre, however, which was supposed to be the most competitive race of the three. There were even news reports that turnout was brisk. Instead, turnout was less than 30%. That is a quite bad result, and before any accusations of vote-splitting are made there needs to be some questions concerning why neither Harvey Locke nor Chris Turner were able to turn out more of their vote.

In the end, Joan Crockatt won by a margin of 4.2 points, almost identical to the five point margin that was measured by the final polls of Forum and Return on Insight. While the scale is very small, this is a comeback of sorts for Alberta polling. Both firms were quite close, with Forum under-estimating Crockatt and Locke's support to the benefit of the NDP and RoI under-estimating Turner's support, again to the benefit of the NDP.

In fact, the New Democrats did quite poorly in this by-election. The forecast expected a minimum of 5% for the NDP, while the lowest poll result had them at 8%. Instead, they ended up with less than half of that. It would appear that many of the voters who cast their ballot for the NDP in 2011 went elsewhere or stayed home. Only the Conservatives lost more support, much of that going to Turner instead of Locke.

The results were again near the median forecast for Crockatt, Locke, and Turner, with Locke somewhat out-performing expectations and Crockatt under-performing. This is a good result for the Liberals, and it is a sign that they can be competitive in Alberta. This is also a very good result for the Greens, but it is hard to imagine that the party would be able to retain this level of support in a general election. The NDP lost out primarily due to the party not being seen as in the running compared to Locke and Turner, but the New Democrats are nevertheless the Official Opposition. While this is too isolated a case to call this a rebuke of Thomas Mulcair's western strategy, there certainly isn't any silver lining in Calgary Centre for the NDP. 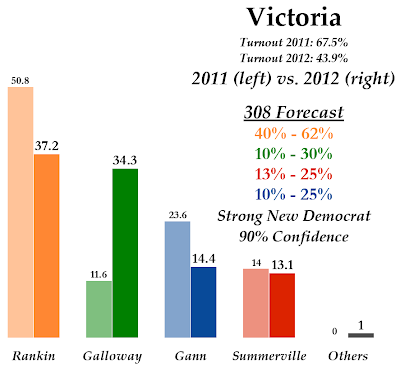 There is in Victoria, however, where despite a steep drop in support the New Democrats held on to the riding.

Murray Rankin must have been somewhat nervous looking at the numbers coming in, as Donald Galloway of the Greens held the lead for much of the early counting. The last poll of the race was done two weeks before the vote and showed the NDP with a comfortable lead, though it also suggested that the Greens were making a push. But with generally poor polling numbers in British Columbia for the Greens of late, it was very surprising to see such a strong showing for Galloway in Victoria.

But this was something I had called a wild-card in the By-Election Barometer. Elizabeth May's riding of Saanich-Gulf Islands is next door and the Greens have generally done well enough in Victoria in recent provincial and federal elections. Turnout was about average for a by-election (though, at almost 44%, stellar compared to Durham and Calgary Centre), but the Greens certainly got their vote out to the polls. The party picked up over 6,000 new voters in this riding alone.

Rankin's result fell just below the forecasted range, while Galloway was just above it. A late poll might have shed more light on the race, but because there wasn't one the forecast had to rely more on province-wide data. That Galloway took so much more of the vote from Rankin than expected is an indication of just how local this race was. The Conservatives dropped a lot of votes as well, but did a little better than expected: instead of finishing just behind the Liberals, they placed just ahead. But both Dale Gann and Paul Summerville's results fell within the forecast ranges.

In sum, it was a decent night for polling as the results in Durham, Calgary Centre, and (to a lesser extent, but certainly in terms of the prospects of Gann and Summerville) Victoria generally aligned with expectations. The forecast was accordingly good, with only three candidates of the 12 forecasted falling outside their expected ranges (and that by an average of only 2.8 points), and most of the results within a few points of the median forecast. I think this is about as good as can be done in by-elections with the information available and the amount of unknowns at play.

It is difficult to choose a winner or a loser in last night's results. The Greens did about as well as possible without winning a race, making the by-elections a big moral victory for the party. That is only worth so much, however. The real test will be how Green candidates will do in Victoria and Calgary Centre in 2015.

The Liberals showed they can be competitive in Alberta, which is a strong signal from a party that has been increasingly written-off, both provincially and federally, in western Canada. But they slightly under-performed their 2011 results in Durham and Victoria. As that federal election has to be a low point for the party if they have any hope of a future, that is nothing to crow about.

The New Democrats held on to their riding in Victoria, so they have more to show from last night than either the Greens or Liberals. They were never in the running in either Durham or Calgary Centre. But they almost lost Victoria and their result in Calgary was very low for the Official Opposition. Growth in Durham, on the other hand, suggests that the NDP can make inroads in Ontario, an absolutely essential component to any winning NDP map in 2015.

As the Conservatives won two of three by-elections at stake, they have to be last night's big winners. But that is more due to the bullet they dodged. Had Crockatt lost the by-election in Calgary Centre (and she almost did), the Conservatives would have had a very bad night. Questions would have been asked about whether the party was shifting too far to the right, or if the split between Wildrose and the PCs could poison the party in the long-term. If these are indeed problems, the winning result could lead to the party ignoring them, but a win is a win and the Conservatives have plenty of time to rebuild whatever bridges have been burnt with a segment of the Albertan electorate. Durham was a strong result with over 50% support and only a slight dip in support (as should be expected when an incumbent retires), and though Victoria was a very poor showing, it isn't the sort of riding the Tories need to win.

Mixed results for all four parties, then. Silver-linings for the Greens and Liberals in their losses (which, in the end, would have been upsets anyway) and wins for the Conservatives and NDP despite their setbacks. All four parties have something to be proud of and something to give them pause. But with their huge increase in vote totals and vote share, the Greens are the only party that may have changed things last night.
Posted by Éric at 9:26:00 AM