Vote efficiency returns to the PQ

On Saturday, Le Devoir and the Montreal Gazette released the results of the latest Léger Marketing poll on the voting intentions of Quebecers, as well as their views on the new budget. The results show very little change in support for the major parties, but at the regional level the vote is back to working out to the advantage of the Parti Québécois, an advantage the party had lost in the last election. 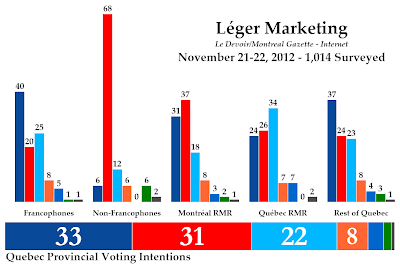 Léger was last in the field Oct. 15-16, and since then the Parti Québécois was up one point to 33%, putting them narrowly ahead of the Liberals, who were also up one point to 31%. The Coalition Avenir Québec was down three points to 22%.

Québec Solidaire was unchanged at 8%, and Option Nationale was up two points to 4%. The Greens and other parties were unchanged at 2% and 1%, respectively.

None of these changes of support are statistically significant, though it is worth noting that, at 22%, the CAQ is back down to pre-campaign levels of support. Also, ON has never done better than 3% in any poll.

The PQ has traditionally enjoyed a much higher vote efficiency than the Liberals, due to their lead among francophone voters. The classic example is the 1998 election, where the Liberals actually won more votes while the PQ formed a majority government. Their victory by less than one point would have, by that measure, ensured far more than a four-seat edge in the last election. It was the closer race among francophone voters between the PQ and the CAQ that changed things.

But this poll gave the PQ a 15-point lead among francophones, with 40% support to 25% for the CAQ. The Liberals were down to 20%. That is very important for the PQ, as it makes it possible for them to win a majority government even with only 33% province-wide support.

The Liberals led among non-francophones with 68%, followed by the CAQ at 12% and the PQ, QS, and Greens at 6% apiece. 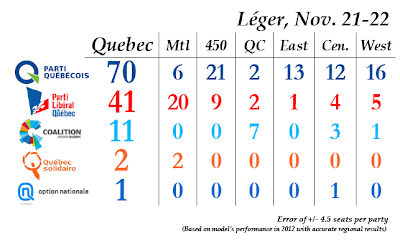 This would result in a rather comfortable majority government for the Parti Québécois, with 70 seats to the Liberals' 41 and the CAQ's 11. Québec Solidaire would win two seats and Option Nationale would win one.

How is this possible? The francophone vote makes all the difference. The CAQ has fallen quite a bit in and around Montreal, which makes no difference on the island but means a lot of PQ pick-ups off of it. And as the Liberals and CAQ are both well down in the regions, the PQ moves ahead in a lot of close contests. QS and ON have picked up support outside the main cities, but that has not come at the expense of the PQ.

There is no reason to expect the sort of under-estimation by the seat projection model of the Liberals' resilience as occurred in the last election, as that was in large part due to the more unpredictable distribution of the CAQ's support. In other words, there would be very good reason to expect that the PQ would indeed win a majority government with these regional numbers. Based on past performance, the probability of a PQ majority would be about 77%.

The poll had a few other interesting results. Satisfaction with the government stands at 37%, with dissatisfaction down two points to 54%. That is not horrible compared to the dismal numbers of the Charest government, but also a sign that Quebecers still remain quite polarized. In any case, in this divided electorate 37% support is enough to win a huge majority.

The budget that Minister of Finance Nicolas Marceau recently introduced gets a pass by 33% of Quebecers, which Christian Bourque of Léger Marketing said was actually a good result, considering that budgets are generally unpopular (Raymond Bachand's last budget had 20% support). Only 22% wanted the opposition to defeat the budget, which would result in another election (the CAQ has ruled out any idea of governing in coalition with the Liberals).

Support for sovereignty stood at 39% in the poll (49% among francophones), generally where it has been for some time. The Léger report shows that, since April 2011, sovereignty has been at between 36% and 43% support, a band narrow enough to say that it has held rather steady over that period. A recent Angus-Reid survey put support at only 32%, but had not removed the undecideds as is done by CROP and Léger. Among decideds, support was at about 37% in the Angus-Reid poll.

What is interesting about this question is that support for sovereignty is very strong among PQ and ON supporters, but is split 50-50 among supporters of Québec Solidaire. The party is sovereigntist but is apparently identified more as a left-wing party and a safe one for left-wing federalists to vote for. This would suggest that QS is not eating into the PQ's support as much as might be thought. In fact, at these numbers, Option Nationale is taking away about as much potential sovereigntist support from the PQ as QS is.

The poll also included a look at where the four candidates for the Quebec Liberal leadership stand. The result is generally the status quo, but with a big uptick in undecideds from 32% to 42%. 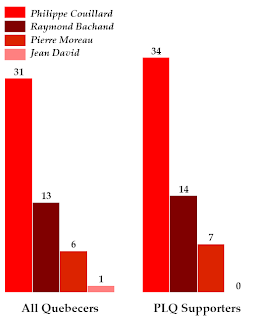 Philippe Couillard remains the favourite, but he has taken a hit. Among all Quebecers, his support was down six points to 31%. It was down 14 points to 34% among PLQ supporters. However, that still puts him well ahead of Raymond Bachand, who was down one point to 13% among all Quebecers and two points to 14% among Liberals. Pierre Moreau and Jean David are well behind. But while Couillard appears to have a wide advantage, reports suggest that among delegates the race is far closer between Couillard and Bachand.

The biggest challenge facing the next Liberal leader, aside from the potential fallout of the on-going Charbonneau Commission, will be to regain the sympathy of Quebec's francophones. They also prefer Couillard to Bachand by 32% to 15%, but whoever does win will have a steep hill to climb among this election-deciding electorate.
Posted by Éric at 10:11:00 AM