Lost in the weeds of a poll on the fortunes of Mayor Rob Ford of Toronto, Forum Research's latest poll on the feelings of Torontonians included provincial voting intentions, as well as thoughts on the on-going Ontario Liberal leadership race. The results show that the vote is splitting three-ways in Toronto, and that - shockingly - Torontonians favour a local boy for the leadership. 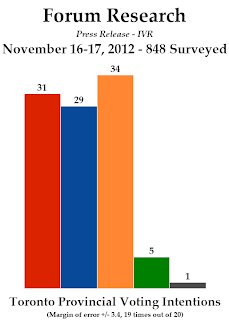 The poll found the New Democrats ahead in Toronto with 34%, putting them narrowly up on the Liberals, who were at 31%. The Progressive Conservatives came up third with 29%, while the Greens were well back at 5%.

Forum broke down the city into four regions, with each party leading in at least one of them. The New Democrats were ahead in Toronto/East York and in Etobicoke/York, while the Liberals were ahead in North York. The Tories had the edge in Scarborough.

But each part of the city was also split: the Liberals were in the race for Toronto/East York and the Tories in Etobicoke and North York, while all three parties were competitive in Scarborough.

That the Liberals are leading in North York should not be too surprising, they won all of the area's seats in October 2011. The NDP also did quite well in that election in their two pockets of support in this poll. But the PCs being ahead in Scarborough makes it quite possible that Tim Hudak could make a mini-breakthrough into Toronto. This could be an anomaly of the poll, as the Tories did not do very well in the Scarborough ridings in the last election, but it does suggest that the electoral map of Toronto could be a mish-mash of colours when Ontarians are called back to the polls.

Forum's look at the Ontario Liberal leadership race in Toronto tells us little about how the convention will unfold, but it does give an indication of what Torontonians, the last bastion the Liberals can still (mostly) count upon, would like to see as the outcome. 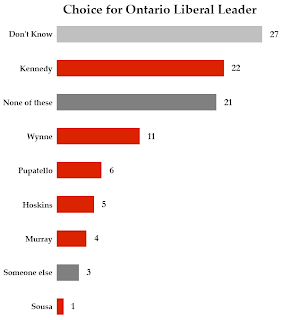 Not surprisingly, Gerard Kennedy and Kathleen Wynne, both from Toronto, topped the list. Kennedy came out well ahead, however, with 22% support as the best choice among all polled residents of the city. Wynne came up second with 11%, while Sandra Pupatello (Windsor) was third with 6%. Eric Hoskins (5%), Glen Murray (4%), and Charles Sousa (1%) rounded out the list.


Among Liberal voters in Toronto, Kennedy does better: 32% to 12% for Pupatello and 10% for Wynne.

Word is that Kennedy's campaign is not as well organized as those of some of his main competitors, but having an edge in Toronto could be important. If most of the delegates from ridings in the city vote for him, he will have a solid base of support on the first ballot. Whether he will be able to grow that support, however, will be the big question at the convention - as it was in 1996.
Posted by Éric at 10:35:00 AM