A new poll by Forum Research for The National Post made a splash this week, as it showed that the Liberals under Justin Trudeau would have a 10-point lead and be in the running for a majority. The far more interesting story, though, was the close three-way race that Forum identified in their non-Trudeau numbers. For a more condensed take on this poll, check out my article for The Huffington Post Canada here. 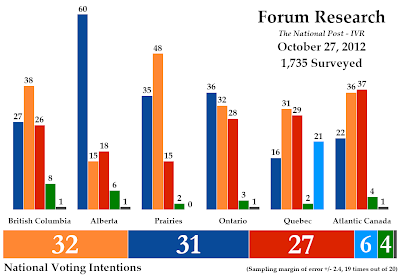 Forum was last in the field on Sept. 26, and since then New Democrats picked up two points to reach 32%, putting them narrowly ahead of the Conservatives. The Tories dropped four points to 31% while the Liberals were up two points to 27%.

The Bloc Québécois had 6% support and the Greens were up one point to 4%.

A few things are worth pointing out with this poll. Forum's report (and, as a result, the Post's) erroneously says that the margin of error is +/- 2%. A sample of 1,735 actually has a margin of error of +/- 2.4%. We'll give them the benefit of the doubt and assume this was a typo on their part.

But the field date for this poll was Oct. 27. That was a Saturday. Pollsters usually avoid polling on Saturdays since people are less likely to be home, making the type of person who picks up the phone on a Saturday less representative of the entire population. Polling on a weekend during an election campaign or as part of a multi-day poll is more common place, but this snap-shot Saturday poll is quite unusual. (The first commenter to claim that the poll disproportionately under-estimates Conservative support because their voters are "outside playing with their children" loses - the last poll from Abacus Data showed little difference in voting intentions between households with and households without children in them.)

Lastly, the numbers reported by Forum on how respondents voted in the 2011 federal election are problematic. They show a vote share of 35% for the Tories (five points below the actual result), 27% for the NDP (-4), 25% for the Liberals (+6), 6% for the Bloc (correct), 5% for the Greens (+1), and 3% for other parties (+2). Memory can be faulty, of course, and is only worth so much considering how many provincial elections have taken place since May 2011. These are likely also the unweighted numbers before correcting for demographics and regional distribution, but we do not know. As is the case with too many pollsters in Canada, there is no detail in the report about what the raw data looked like and how it was weighted.

In terms of the results, only the four-point drop for the Conservatives was statistically significant, and while the gap between the NDP and Tories is insignificant, the gap between the Liberals and Tories is not. In other words, the poll strongly suggests that the Liberals are in fact in third place and that this poll does not represent a sort of three-way tie. But it is very close.

The Liberals were in front in Atlantic Canada with 37%, narrowly edging out the NDP at 36%. The Conservatives were down 12 points to 22%. 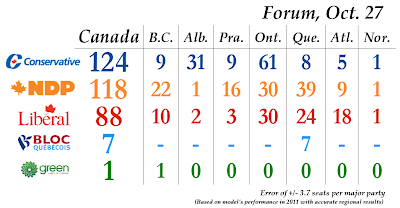 With these numbers, the Conservatives would squeak out a bare plurality with 124 seats on the boundaries of the proposed 338-seat map. The New Democrats would win 118 seats, the Liberals 88, the Bloc Québécois seven, and the Greens one.

The NDP lost out on the chance to come out on top in the seat count due to the Tories' advantage (in both votes and geography) in Ontario and the close race in Quebec and Atlantic Canada. But with a combined 206 seats, the Liberals and NDP could likely come to some agreement.

The results of the poll with Trudeau as leader follow the same trend as other surveys. Hypothetical as they may be, they do indicate a weakness in the NDP's numbers as the Liberals steal from their pockets of support very easily. 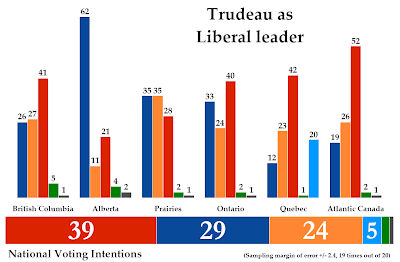 With Trudeau as leader, the Liberals would take 39% of the vote, a gain of 12 points. Two of those come from the Tories (bumped down to 29%) and eight of them come from the New Democrats (who drop to 24%). Trudeau's presence also hurts the Greens, as their support is cut in half from 4% to 2%. 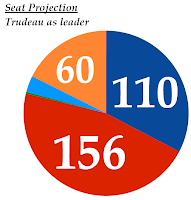 As a result, they still remain very competitive and would likely win 110 seats with these numbers. The Liberals would win 156, 14 short of a majority, while the New Democrats would win 60, the Bloc 11, and the Greens one. More than four out of every five Liberal seats are won east of Manitoba, while the Conservatives win half of theirs west of Ontario.

Again, these hypothetical numbers are worth very little in terms of telling us about how the Liberals will do under Justin Trudeau. But, as I have said before, they speak more to the lack of attachment between the NDP and a lot of their new supporters. It is worrisome when the NDP loses 25% of their supporters just because Trudeau is mentioned, while the Conservatives only lose 6% of theirs. The idea that Justin Trudeau would easily win the next election based on these hypothetical polls can be dismissed quite easily, but this under-lying problem for the NDP cannot.
Posted by Éric at 10:41:00 AM