Last week, both Nanos Research and Forum Research released their latest numbers, and both polls gave a very similar picture of the federal race. That picture suggests a roughly five-point Conservative lead, with the Liberals and New Democrats neck-and-neck for second place. Further along in this post is a breakdown of tonight's by-election races. 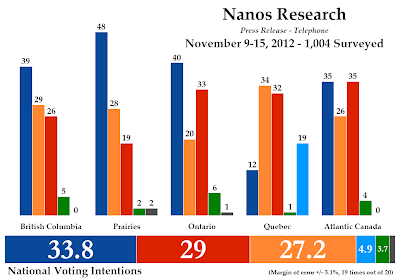 None of these shifts appear to be outside the margin of error, while the Conservative edge is just inside of it.

The Conservatives led in the Prairies, which in Nanos's polling includes Alberta, with 48.4%, followed by the NDP at 28.1% and the Liberals at 19.2%.

The Tories were also given the edge in Ontario with 39.7% support, compared to 33.3% for the Liberals and only 19.9% for the NDP. That is a very low score for the New Democrats in Ontario, but it is not unusual for Nanos to have these sorts of numbers.

At 39.4%, the Conservatives were ahead of the New Democrats (29.3%) in British Columbia, while the Liberals were down 14.8 points to 25.8% in the province. The last Nanos poll had the Liberals at 40.6% in B.C. It looked like an outlier at the time, and it is quite clear now that it was.

The New Democrats did place first in Quebec with 33.6%, just ahead of the Liberals who were up to 31.6%. The Bloc Québécois was third with 19.3% while the Conservatives were down to only 11.5%. 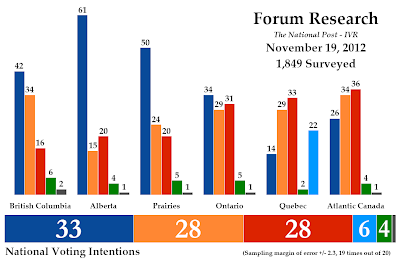 Forum's national numbers were very similar to the ones put out by Nanos, seemingly confirming the state of the race.

Since Forum's last poll of Oct. 27, the Conservatives picked up two points and led with 33% support. The NDP was down four points to 28%, putting them tied with the Liberals, who were up one point. The Bloc and Greens were unchanged at 6% and 4%, respectively.

The drop by the NDP is noteworthy, while the Tories and Liberals were statistically unchanged.

It is perhaps worth noting that neither of these polls included details on unweighted sample sizes. 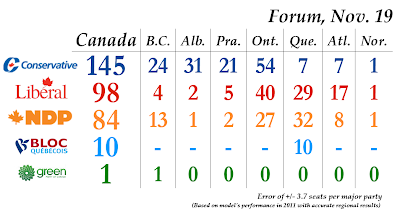 The Forum poll would have resulted in the Conservatives winning about 145 seats on the proposed boundaries of the new 338-seat map. The Liberals would win 98 seats and the NDP 84 seats, with 10 going to the Bloc and one to the Greens.

For the NDP, falling behind the Liberals in Quebec and placing third in Ontario scuttles their chances of finishing ahead of the Liberals in the seat count. The close race in Ontario is, in large part, what deprives the Tories of a majority.

The results of the Nanos poll are quite similar, with the Conservatives winning 146 seats, the Liberals 97, the NDP 93, and the Bloc only two.

Again, Ontario and (to a lesser extent) Quebec is the reason for the third-place finish for the NDP. The Conservatives are hurt more in this poll, however, by their lower results on the Prairies.

Forum also included some polling on a Justin Trudeau-led Liberal Party, finding that his leadership would vault the party into first place with 39% support, dropping the Tories to 30% and the NDP to only 23%. The Trudeau Liberals would lead by significant margins in Ontario, Quebec, and Atlantic Canada and edge out the NDP in Alberta and the Prairies. In terms of seats, this would deliver 159 to the Liberals (10 short of a majority), 122 to the Conservatives, and 46 to the NDP.

More realistically, both Forum and Nanos had some personal ratings for current party leaders. Forum found that Stephen Harper's approval rating stood at 36%, compared to 55% disapproval. That is virtually unchanged from their last poll. Bob Rae's were also relatively steady, at 35% approval to 33% disapproval.

Federal by-elections will be taking place tonight in Durham, Victoria, and Calgary Centre. The By-Election Barometer has a breakdown of the by-election races. Durham is forecast as a Strong Conservative riding, giving the Tories a 95% chance or higher of winning. Victoria is a Strong NDP riding, while Calgary Centre is a Likely Conservative win. The polls have indicated a close race there, but they have all put Joan Crockatt in the lead and the riding itself leans heavily towards the Tories.

In terms of specific vote share forecasts, I have seen criticisms that my confidence intervals are quite large. This is a recognition that, when it comes to by-elections, we know very little. In fact, it is quite unusual that we have had two polls done in Victoria and Durham and four in Calgary Centre during their respective campaigns. But these races are quickly evolving, and two weeks separates Forum's last polls in Victoria and Durham from today's vote. The last polls in Calgary Centre were done about a week ago, or even earlier.

During the Republican primaries, which were heavily polled, Nate Silver at FiveThirtyEight still had 20-point confidence intervals in his forecasts in Iowa for the leading candidates, and that kind of forecasted range was common throughout the primaries. The results were usually close to his median forecast, but not always. With more information going into these by-elections, it would be much easier to make tighter forecasts.

The race in Durham seems the most straightforward, and the forecast gives Erin O'Toole between 40% and 55% support, to between 19% and 30% for Larry O'Connor of the NDP. Grant Hume of the Liberals is expected to finish with between 15% and 25% of the vote, while the Greens could get between 4% and 10%. O'Connor does have some name-recognition in the riding so the potential for a stronger finish is there, but it seems a near certainty that O'Toole will win. The rolling average margin of victory, based on the swing from province-wide polling, stands at 16.8 points. In a normal election campaign, a call based on that size of margin would be right 81% of the time.

Victoria is another riding that shouldn't have any surprises. Murray Rankin of the NDP is forecast to take between 40% and 62% of the vote, while Donald Galloway is expected to place second with between 10% and 30%. The Liberals should finish third with between 13% and 25%, with the Conservatives taking between 10% and 25%. The rolling average margin of victory of 25.8 points would result in a correct call in a general election 90% of the time.

Calgary Centre is the real race to watch tonight. The polls have been close and the campaigning has been fierce. How will it all shake out tonight? What role will turnout play? Will strategic voting decide the result? This is, without a doubt, the most difficult by-election to call of the three and one of the most interesting in recent memory. The forecast is for Joan Crockatt of the Tories to take between 30% and 55% of the vote, with Harvey Locke of the Liberals placing second with between 24% and 37%. Chris Turner of the Greens could also do quite well, with a forecasted result of between 10% and 30%. The NDP should finish fourth with between 5% and 20%. The average margin in the provincial polls is 14 points, which would result in the right call 77% of the time. But the margin was five points in the last two riding polls - the kind of call that the model would only have 60% confidence in making. The forecast still expects a Conservative victory, but it would also not be surprised if Crockatt does not win.
Posted by Éric at 10:41:00 AM