The last poll by Forum Research in Calgary Centre spilled a lot of ink last week, as it showed a mere two point lead for Conservative candidate Joan Crockatt over Liberal Harvey Locke in what is supposed to be one of the safest regions for the Tories in all of a Canada. But it had the look of an outlier poll - that is, until Forum did another survey this week and showed that the race was looking no different. 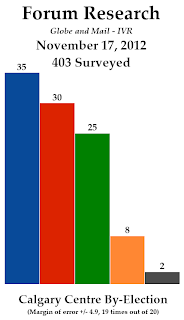 When originally faced with such an outlandish result, the smart money was to consider the poll more likely than not to be misreading the race. To have another poll showing no statistically significant difference adds a lot of weight to the argument that Calgary Centre is indeed a horse race, which no longer seems so unthinkable considering how things have been unfolding in the riding. Nevertheless, the possibility that Forum is still misreading the race for methodological reasons cannot be dismissed out of hand, but there is less reason for caution than there was a few days ago.

The poll found Crockatt at 35%, up three points since Forum's Nov. 12 poll. Locke was unchanged at 30%, while Green candidate Chris Turner was up two points to 25%. Dan Meades of the NDP was down four points to 8%, while 2% of respondents said they would vote for another party (-2). As mentioned, none of these shifts of support are outside the margin of error.

While the evidence leans in favour of a Crockatt lead (she has not trailed in any of Forum's polls) the gap between her and Locke is within the margin of error. But so is the gap between Locke and Turner, though again the most likely situation is 1-2-3 for the Tories, Liberals, and Greens.

But this poll is not completely beyond questioning. Though I highlighted Forum's recent successes in riding polls last week, there are a few points to consider. Firstly, the poll was conducted on a Saturday, generally a bad day to do a poll.

Secondly, the findings in the report on how respondents voted in the last federal election do not match up entirely with the real results. The totals for the Tories and Greens are within the MOE, but it seems possible that the sample is slightly (maybe by a point or two) over-sampling Liberals and under-sampling New Democrats (by two or three points). This can be due to lapses in memory or a changing population (2% said they voted for the Bloc, so they are either displaced Quebecers or fibbers), and is probably not enough to cause a major problem. We also don't know how Forum weighs these responses, if it all. If they don't, there is the possibility that Crockatt's lead is slightly under-estimated.

But it is hard to tell with sample sizes of about 400 people or less in each of the polls Forum has conducted during the by-election campaign. It is actually theoretically possible that the poll is gauging things correctly within the margin of error and Crockatt's support has not dipped below 37% over the last few weeks, or that Locke's has never been higher than 25% since the campaign began. 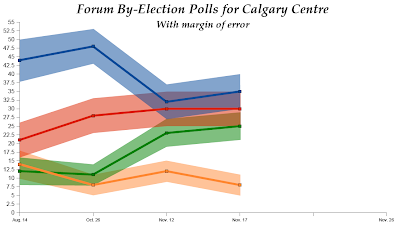 That is, however, more unlikely than the true support levels being closer to Forum's estimation. Theoretically at least, the odds that the real situation is at the extreme of the margin of error is quite low. But recent elections have demonstrated just how much theory can depart from reality.

The chart above shows support for each party and the bands of support that is accounted for by the margin of error. The band is narrower, for example, for the NDP than the Conservatives because margin of error is calculated differently depending on the support a party has. To put it simply, a party can't have a margin of error of +/- 5% if its support is gauged at 4%.

The chart shows how it is possible for there to be little movement from poll-to-poll. The Liberals being stagnant at 26% is possible throughout Forum's polling. Conversely, it is also possible (though far less likely) that the Liberals have gone from 16% to 35%. What this chart does show quite clearly, however, is that a drop in Crockatt's support has almost certainly occurred, with almost all of that going to Turner of the Greens.

Despite the close race, a lot of factors weigh in Crockatt's favour. Most importantly, she has yet to relinquish the lead in any of these polls. She is the closest thing to an incumbent, and her support is likely to be drawn from those older voters who are more likely to turnout. It is possible that the enthusiasm the Turner and Locke campaigns have created (simply because it doesn't look like they'll be trounced) could boost turnout among their supporters and that Crockatt's performance in this campaign will depress her own turnout, but the fundamentals of the riding still point to her having the advantage. Nevertheless, this last week could be decisive.
Posted by Éric at 10:13:00 AM