Late last week, a new poll from Ipsos-Reid was released further confirming that the race remains a three-way contest, though the Conservatives and New Democrats still hold the advantage over the third-place, but gaining, Liberals. 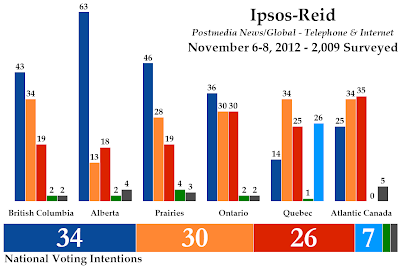 Reports that have accompanied this poll emphasize just how much the New Democrats have lost to the benefit of the Liberals. That is not inaccurate, but the comparison needs to be put into context: Ipsos-Reid was last in the field June 20-21.

June was the high-watermark of NDP support, so that they have dropped so much from a June poll is not much of a surprise.

Specifically, they were down eight points to 30%, putting them four points behind the Conservatives. They slipped one point to 34%. The Liberals were up eight points to 26%, while the Bloc Québécois was at 7% and the Greens at 2%. The shifts in support for the Liberals and NDP appear statistically significant.

It should be noted that this Ipsos-Reid poll was actually in the field just before last week's Abacus Data poll, and it also has to be noted that the poll Ipsos did in June was conducted online only. This poll was a hybrid telephone/online poll, so any shifts in support since their last survey could be partly the fault of the different methodologies that were employed. 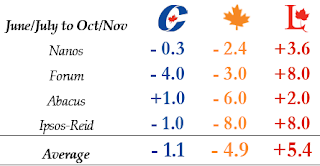 But the changes Ipsos recorded since their June poll fall well into line with other recent surveys. On average, the Liberals have gained 5.4 points in polls by the same firms taken in June/July and October/November. The NDP has dropped 4.9 points and the Tories have slipped 1.1 points.

Clearly, the last four or five months have good for the Liberals. Their gain has come primarily at the expense of the NDP. That plays into the hands of the Conservatives, but at current support levels they would only likely win a minority government - which could spell the end of their time in power.

The result of 2% for the Greens ties their worst result in any poll taken since the May 2011 election, and even well before that. However, there are two reasons for this low number for the Greens. When Ipsos-Reid does their telephone polling, they do not "prompt" for the Green Party as they do for the other parties. Respondents are allowed to say they will vote for the Greens, and that is recorded, but they are not listed along with the other parties in the survey questions. Nanos Research also does not prompt, though they do not prompt for any of the parties. 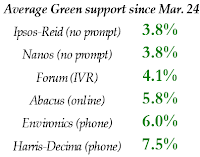 This has the effect of giving lower scores for the Green Party. If we look at the average results of pollsters who have been in the field at least three times since March 24 (when Thomas Mulcair became leader of the NDP), we see that Ipsos-Reid and Nanos each average 3.8% Green support over that time.

Forum, which uses an IVR method that does prompt for the Greens, comes in third with 4.1%. Abacus's online panels yield an average result of 5.8%, while the prompting live-callers of Environics and Harris-Decima get the highest results for the Greens. Recent elections suggest that not prompting will get a more accurate result for Green Party support, but that still probably under-scores its actual support among the general (including non-voting) population.

But there is a second reason for Ipsos's low number. While unprompted support for the Greens is recorded in their telephone polling, respondents to their online poll only get the option to support "Other". The average that was calculated above included both Green and Other support. In Ipsos's last online-only poll, support for other parties was 4%. Generally speaking, it is safe to assume that most of this is support for the Greens, but in this case it explains why the party scored so low. That 2% for other parties comes largely from the Green supporters who responded to the online survey. That makes Green support likely closer to 4% than to 2%.

The Liberals were narrowly up on the New Democrats in Atlantic Canada with 35% to 34%, while the Conservatives were third with 25%.

With these numbers, the Conservatives would win 144 seats on the proposed boundaries for the new 338-seat electoral map. The New Democrats would win 98, the Liberals 84, and the Bloc Québécois 12.

This puts the Tories in a minority situation, whereas the New Democrats and Liberals have enough seats to command a majority. The NDP's lower-than-usual results in B.C. and the Prairies hurts their numbers, while the Conservatives are hamstrung by the closer race in Ontario. But at 26 seats short of a majority, they would also need to do better on the two coasts.

This Ipsos-Reid poll confirms some recent trends, particularly the large Liberal gain in Quebec. While that is the major reason the NDP has slipped further from the Conservatives (put them back to 43% in the province and the national margin shrinks to one or two points), the Liberals have stolen enough points here and there from the party to make things even more difficult. But that does not absolve the Conservatives, who are down six points from the 2011 election. They are keeping their head above water, but they are far from being in a comfortable position, and have been for the last year.
Posted by Éric at 8:36:00 AM