October was a quiet polling month, at least on this side of the border. Only two national and one provincial (Quebec) polls were conducted in October, down quite a bit from the eight polls that had been done during the month of September. Though the monthly averages are not drawing from as large of a sample as is usually the case, here they are for the sake of continuity. 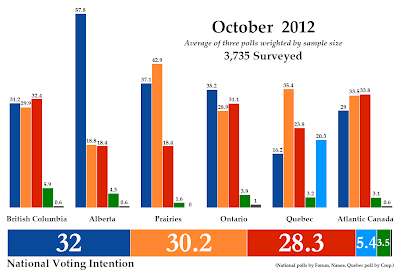 The Conservatives averaged 32% in the month of October, down 1.5 points from their average result in September. The New Democrats were down 1.1 points to 30.2%, while the Liberals were up six points to 28.3%.

The Bloc Québécois averaged 5.4% support and the Greens 3.5%, and an average of 0.5% of respondents said they would vote for another party.

Regionally, the Tories had the edge in Alberta and Ontario while the New Democrats were ahead in Quebec and the Prairies. The Liberals were in front in Atlantic Canada and British Columbia.

This represents a huge jump in support for the Liberals nationwide, but also in most parts of the country as well. This is in large part due to the big number the party put up in October's Nanos poll, but is there anything we can discern from the trends across both polls that were conducted this month? 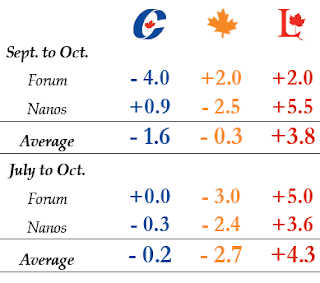 Not particularly, at least compared to September. Both Nanos and Forum were in the field in both months, but they had the Tories and NDP heading in different directions. Nanos saw a small uptick in Conservative support while Forum saw a drop, and Forum recorded an NDP gain and Nanos a slip. They both agreed, however, that the Liberals were gaining - by an average of 3.8 points.

If we look at the previous month in which both Nanos and Forum were in the field, we see some clearer trends. Since July, the Conservatives have held relatively steady while the New Democrats dropped an averaged of 2.7 points. The Liberals made large gains in both polls since July. 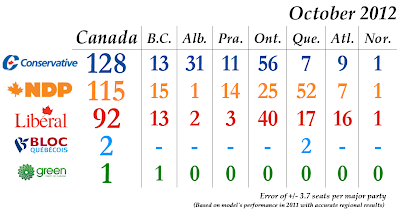 But compared to September, the October numbers knock the Conservatives down 24 seats to 128 on the 338-seat map. The New Democrats would win 115 seats, up six since September, while the Liberals would win 92 (up 29).

The poor performances of the Conservatives in British Columbia (due in large part to the Liberals) and in the Prairies (due to the NDP) makes it very difficult for the party to win anything but a bare plurality of seats. The New Democrats would need to make up some ground in Ontario in order to move ahead of the Tories, but a Liberal gain in the province is more efficient at whittling down the Conservative number.

With only two polls in the field in October, it is impossible to determine if some of the wilder results (particularly in British Columbia) are outliers or not. It does seem that the Liberals are eating into the support of both the Conservatives and the New Democrats, and it is difficult to separate that from the on-going leadership race. I suspect that we will continue to see some strange fluctuations until the next leader is chosen.
Posted by Éric at 9:02:00 AM