Yesterday, Abacus Data released their latest national survey suggesting that the New Democrats have taken a big hit over the last two months, almost entirely to the benefit of the Liberals. But the Liberals were already starting from quite low in Abacus's polling, meaning that the net effect is a wider Conservative lead rather than a three-way contest. 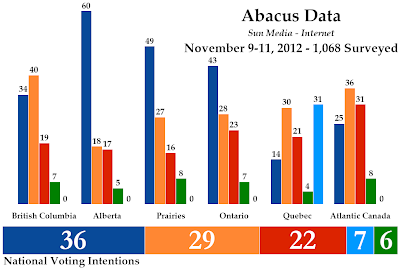 Abacus was last in the field Sept. 14-18, and since then the Conservatives picked-up one point to lead with 36% support. The New Democrats fell six points to 29%, while the Liberals were up five points to 22%. These latter two are statistically significant shifts in support, and the margin between these two parties has been narrowing in most recent polls.

The Bloc Québécois and Greens were unchanged at 7% and 6%, respectively.

Abacus conducts its polling using the online panel run by Angus-Reid. Their report includes both weighted and unweighted sample counts for the regional distribution, though not for other demographic categories. Nevertheless, Abacus is always very transparent about their polls when approached.

The gender gap is not nearly as wide in this survey as we have seen in some others: the Tories lead by eight among men and six among women.

It also worth noting that a majority of respondents now think that the country is headed in the right direction, up 10 points to 51% since September.

The Conservatives led in this poll with 43% in Ontario, followed by the New Democrats at 28% and the Liberals at 23%. That 43% number is a very big one for the Tories - they have been pegged at or above 40% in only six of the last 36 polls in the province.

In Quebec, the Bloc Québécois actually moved ahead with 31%. The NDP fell nine points to 30%, while the Liberals were up eight points to 21%. The Tories brought up the rear with 14%.

The province appears to be going through (another) period of flux. If we look at the last 10 polls done in Quebec (stretching back to the end of August), we see that the NDP has averaged about 33.8% support. But in the 10 polls before that (stretching back to mid-June), the party averaged 39.5%. In contrast, the Liberals averaged 17.4% in the older polls but 22.4% in the newer ones. They appear to have gained about five points, almost all of it at the expense of the New Democrats. That should be worrying to Thomas Mulcair. 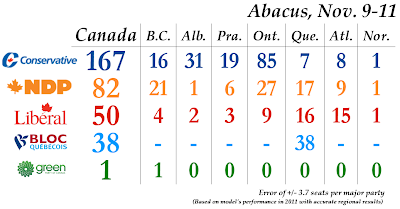 With these numbers, the Conservatives would likely win around 167 seats on the proposed boundaries of the 338-seat map. That puts them three short of an outright majority, but that margin is close enough that the Tories could easily pull it off.

That swing in Quebec is hugely important, as though the Bloc did not make any real gains they move ahead in many ridings simply because of the NDP's slip. A lot of them would be incredibly close, however, so the potential for a dozen or so seats to go back to the NDP is not out of the question. But that is somewhat besides the point - the Conservatives aren't at play in Quebec.

The real problem in this poll for the opposition is Ontario, where the Conservatives win 85 seats. The Tories are about where they were on election night in this survey, but the Liberals are several points down - reducing their seat haul further.

All around, the numbers are quite good for Stephen Harper in this poll. In addition to the increase of people who think the country is headed in the right direction, his job approval rating increase by three points to 39%, while his disapproval dropped to 44%. His favourability was unchanged at 35%, but his unfavourability was down four points to 46%. Mulcair has better overall numbers (29% favourable to 24% unfavourable), but this poll suggest a steep decline in Mulcair's favourability rating (and an increase of his neutral rating by five points to 36%).

The Conservatives need to rebuild a few bridges in British Columbia and Atlantic Canada, but have a far less formidable task ahead of them than either the Liberals or the NDP. Being this far behind in Ontario is a big problem, and neither party has a chance of unseating the Tories (at least, on their own) unless one of them dominates in Quebec like the NDP did in 2011. The Bloc's vote in the province seems somewhat tied to the support for the provincial Parti Québécois, so how Quebec's provincial politics will shake out over the next three years (which will almost certainly feature another election) could be very important.
Posted by Éric at 8:14:00 AM