It hasn't been a particularly good few weeks or even months for Alison Redford and the Progressive Conservatives. Nevertheless, the party remains in decent form according to the latest set of numbers from Léger Marketing. 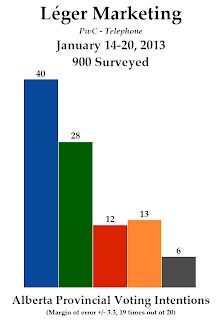 Léger has not reported from Alberta since the 2012 election, so we have no trends to look at. The poll was done via telephone as part of a wider survey for PwC, but the numbers align with what we have seen from other relatively recent polls.

The PCs led with 40%, down from the 44% they got in the 2012 election. Wildrose was down six points to 28%, while the New Democrats and Liberals were both up from the 10% they each earned in 2012. The NDP edged out the Liberals with 13% to 12% support. Another 6% said they would vote for other parties (Alberta, Evergreen, and independents, we can assume).

Oh, did you hear that the polls performed badly in Alberta in 2012? You might not have heard it, or it might have been the only poll-related thing you've heard for the past 10 months. There's no reason to assume that sort of problem occurring again here, particularly as these numbers are close to the last election's results. And Léger was not one of the worst culprits in that campaign, as they were in the field only until Apr. 16, a week before the vote took place.

For Liberals and New Democrats, these results are well within the norm. In four polls since August, the Liberals have ranged between 11% and 14% support while the NDP has scored between 12% and 14% in all five polls that have been released since the last election. The 28% for Wildrose is also generally what we have seen since the vote, with Environics having pegged the party at 29% in October.

The Progressive Conservatives are a few ticks lower than where they were in the summer and fall, as the party polled between 43% and 45% in those months. But the PCs were also at 39% in June 2012, so this 40% (along with the margin of error) is not anything to worry about for Redford - yet. It could be of concern if it is the start of a trend, but the next election will only be held in 2016.

I had to cull these numbers from the report by the Calgary Herald, so I have no regional numbers to pass along. It is still possible to do a seat projection based on the province-wide numbers, however, by applying the provincial swing to each of the model's three regions (Edmonton, Calgary, and the rest). The projection model was actually well calibrated in 2012 - it just needed better polling numbers. With the correct regional results, the model would have projected 65 seats for the Tories, 18 for Wildrose, and four for the NDP, instead of the actual result of 61 for the Tories, 18 for Wildrose, five for the Liberals, and four for the NDP. That the Liberals withstood their huge decrease in support in those five ridings was the sort of thing the model could not take into account, but with that odd result now on the books the same sort of error would not occur again (i.e., because the model missed the five seats in 2012 doesn't mean that it would necessarily underscore the Liberals again. In fact, it might be more likely to over-estimate these MLAs' resilience).

The Tories would actually grow their seat count with these numbers, thanks to the larger drop in Wildrose support. They would win 62 seats, evenly distributed between the three regions.

Wildrose would win 14 seats, all but two of them outside of Edmonton and Calgary.

The New Democrats would win six seats, five of them in Edmonton and the other in Lethbridge, while the Liberals would hold on to their five seats.

The electoral geography is very good for the Progressive Conservatives, who can still win a landslide result with a relatively modest lead. The other three parties win about half as many seats as their support would provide in a proportional system, but comparatively speaking that gives Wildrose a worse-looking result than either the NDP or Liberals, who have strong regional concentration. Unless Danielle Smith can definitively replace the Tories as the preferred option (and not in a flash-in-the-pan sort of way), she needs a regional block of her own to put a serious dent in the Tories' seat count.
Posted by Éric at 10:54:00 AM