NDP comfortably ahead in Quebec

A week ago, La Presse released the latest poll results from CROP at both the provincial and federal levels. Federally, the poll shows that the New Democrats are still well ahead of their rivals in the province - as they have been in CROP's polling since Thomas Mulcair was named leader of the party. Other polls, however, are not so sure.

Provincially, the poll put the Parti Québécois, Liberals, and the Coalition Avenir Québec in a close three-way race. I wrote about the Quebec scene for the Globe and Mail in my weekly piece. We'll take a look at the federal results here. 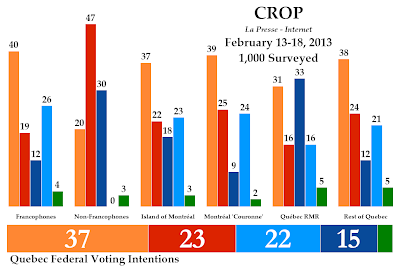 Though I don't recall seeing the results anywhere except in tables of their latest report, CROP was last in the field federally in January. Since then, the New Democrats picked up two points and had 37% support, followed by the Liberals at 23% (+3), the Bloc Québécois at 22% (+1), and the Conservatives at 15% (-4).

The New Democrats have been very steady in CROP's polling, with between 35% and 41% in each of their monthly polls since October. Over that time, the BQ has also been steady while, at 23%, the Liberals are at their highest level of support (at least according to CROP) since September 2010. They were at 13% support as recently as June 2012.

It has to be said that this score for the New Democrats is quite high compared to where other firms have pegged the NDP in Quebec. The current aggregate of all the polls maintained by ThreeHundredEight (including this CROP poll) only puts the NDP at 32.4% in the province. In fact, since October the New Democrats have averaged 38.2% support in five polls from CROP, compared to an average of 31.8% support in 18 polls conducted by other firms. Certainly, it makes more sense to focus on large samples of 1,000 per poll instead of smaller regional samples, but while 5,000 Quebecers were sampled in CROP's five polls since October, 8,690 were sampled in the other 18 polls.

It could be a question of Quebec-based polling firms having a different (and, one would assume, better) way of doing polls in the province. Léger Marketing was in the field twice since October, and gave the NDP an average of 35% support, still higher than the consensus. It should also be recalled that CROP was the first pollster to give the NDP the lead in Quebec during the 2011 election campaign, and was generally more favourable to the party in the run-up to the election than other firms. But whether that is due to having done a better job or merely because the electorate caught up to potential methodological biases in CROP's polling, we cannot know.

Are the Quebec-based pollsters, who have together pegged the NDP at almost six points more support, closer to the mark than their non-Quebec-based competitors? It is hard not to give them the benefit of the doubt.

Outside of Montreal, the Conservatives had a narrow edge in Quebec City with 33% to 31% for the NDP and 16% apiece for the Bloc and Liberals, while in the rest of Quebec the NDP led with 38% to 24% for the Liberals and 21% for the Bloc.

Among francophones, the New Democrats led with 40% to 26% for the Bloc, with the Liberals picking up five points since October (the last CROP poll for which I have regional data) to reach 19%. For the federal Liberals to be doing almost as well as the provincial Liberals among francophones in the province is not insignificant.

Among non-francophones, the Liberals are well ahead with 47% to 30% for the Conservatives and 20% for the New Democrats. That is hardly changed from October's poll, suggesting that the NDP has taken quite a tumble among non-francophones in the province. That puts some of their seats on the island of Montreal in danger, and opens up some possibilities for the Tories.

With these province-wide numbers, the New Democrats would win 54 seats on the current boundaries. The Liberals would increase their seat total to 14, while the Conservatives would hold on to five seats and the Bloc Québécois would be reduced to only two.

I have to abandon projections for the proposed boundaries, as the ones that were laid out in the latest report of the boundary commission are significantly different from their initial proposals (though, I must say, I am very happy they dropped their plan to name a lot of ridings after people instead of geography). Until I or someone else has the time to transpose the 2011 results to the latest boundaries, it would be irresponsible to use anything but the boundaries currently in place. Elections Canada will eventually do the job once the boundaries are finalized. In any case, if the Conservative caucus revolts and votes down their own government (hey, why not?) in the next year or so we would still use the current boundaries rather than the new ones.

The New Democrats are still in a very strong position in Quebec, particularly with none of their rivals able to get very close to them in voting intentions. The Liberals are also in a decent position to make gains - the poll listed the current leaders (i.e., Bob Rae) when asking about federal voting intentions and other surveys have suggested that Justin Trudeau would be able to boost Liberal fortunes to some extent in Quebec. The Liberals appear to have regained favour among Quebec's non-francophones, which gives them a good base in the province. But if the New Democrats manage to remain the favourite option of Quebec's francophones, they will continue to win a large majority of the province's seats.
Posted by Éric at 10:00:00 AM