A rush of polls were released over the last few days, with new national surveys from Abacus Data, Forum Research, and Nanos Research in addition to a new Quebec poll by Léger Marketing. The four polls have some similarities, but they also have some important differences. 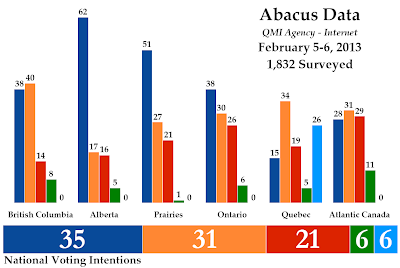 We'll start with the largest poll, conducted by Abacus Data on Feb. 5-6 and surveying 1,832 Canadians. It included an over-sample of Ontario.

Abacus was last in the field on Dec. 7-8. There has been little movement since then, with the Conservatives increasing one point to 35%, the NDP dropping one point to 31%, and the Liberals also decreasing by one point to 21%. The Greens and Bloc Québécois were unchanged at 6% apiece.

Because of the over-sample in Ontario, Abacus had some breakdowns of support at the regional level in that province. The Conservatives topped the table in the GTA with 44%, eastern Ontario with 43%, southwestern Ontario with 41%, and the Hamilton-Niagara region with 40%. They managed 38% in the north and 26% in Toronto.

In almost every regard, Abacus's overall numbers were quite conventional and well in-line with the regional results we've seen from other firms. 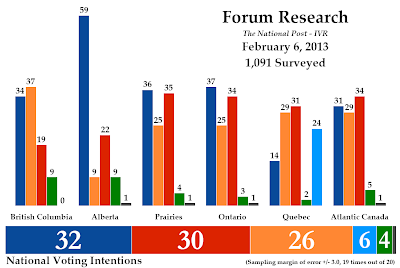 Forum's poll, on the other hand, was somewhat unusual. The firm was last in the field Jan. 16-17, and since then the Conservatives slipped four points to only 32%, while the Liberals were up five points to 30%. Both of these shifts were outside the margin of error. The NDP was down two points to 26%, while the Bloc was down one to 6% and the Greens were unchanged at 4%.

Having the Liberals in second place is a bit of a change from other recent polls, though Forum has tended to have higher results for the party than other pollsters.

The Conservatives led in Alberta with 59%, while the Liberals were up 11 points to 22% and the NDP was down 11 points to only 9%. That 22% for the Liberals is very high, the party's best result in the province in any poll since April 2011, stretching back some 90 surveys. When something like that happens, a red flag is raised: either the result is an outlier, or it is capturing something new. In most cases, it is the former.

There was another unexpected result in the Prairies, where the Tories were down 13 points to 36% and the Liberals were up 24 points to 35%, their best result in 117 polls stretching back to March 2011. The NDP was third with 24%.

The Liberals were in front in Atlantic Canada with 34% to 31% for the Conservatives and 29% for the NDP. The party was also ahead in Quebec with 31% to 29% for the NDP and 24% for the Bloc Québécois. Such a strong result for the Liberals in Quebec is not unusual for Forum.

The New Democrats had the advantage in British Columbia with 37% to 34% for the Conservatives and 19% for the Liberals.

Why the strong numbers for the Liberals in this Forum poll? The Abacus Data report included the unweighted and weighted sample sizes. Forum's report did not. You can see that in Abacus's report past voting behaviour is taken into account in the weighting, while we do not know if that is the case in Forum's polling. Hopefully it is, as the report shows that respondents to Forum's poll said that 31% of those who did vote in 2011 voted for the Conservatives, 27% for the NDP, and 23% for the Liberals (compared to 40% CPC, 31% NDP, and 19% LPC, as it should be). The sample that Forum put together put the Liberals in third in Quebec instead of fourth and the NDP first in the Prairies and British Columbia instead of well behind the Tories in second.

Does Forum make enough of an adjustment to correct for this discrepancy, or is the sample heavily tilted towards the Liberals? And even if Forum does weigh according to past voting behaviour, what does it say about the sample if it is so different from actual results? Abacus provides some contrast: according to their report, their sample voted 43% for the Conservatives in 2011, 29% for the NDP, and 19% for the Liberals. Much better results, which means less playing around with the weightings. 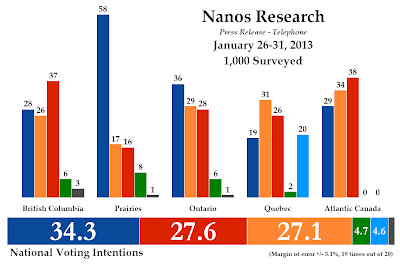 Then there is the Nanos poll. We haven't heard from Nanos since Nov. 9-15 (and to be fair to Forum, Nanos's reports contain less information than Forum's, though they do have the long and successful track record to rely upon). Since November, the Conservatives gained 0.5 points to reach 34.3%, while the Liberals were down 1.4 points to 27.6% and the NDP was down 0.1 points to 27.1%. The Greens were up one point to 4.7% while the Bloc was down 0.3 points to 4.6%.

All of these changes in support were within the margin of error.

The Liberals were in front in British Columbia with 36.8%, their best result since Nanos's October poll. In fact, Nanos is the only polling firm to put the Liberals at over 30% support in B.C. since January 2011, which they have done on several occasions. The Tories trailed with 27.9% while the NDP was at 25.9%. The Liberals were also ahead in Atlantic Canada with 37.8% to 33.6% for the NDP and 28.6% for the Conservatives.

In terms of trends, if we look at changes since Abacus and Forum were in the field in November (when Nanos was also last in the field), we see there has been almost no movement since then. All of the parties have only moved two points or less in each firm's set of polls, with no consistency in direction. On average, the Tories were down 0.5 points, the NDP was unchanged, and the Liberals were down 0.1 points. That is about as steady as it gets. 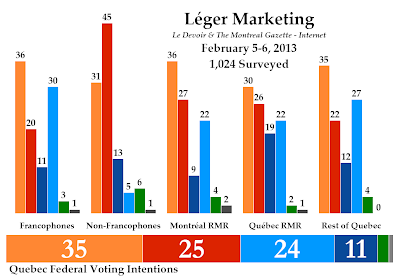 Léger also reported on the situation in Quebec. It last had federal numbers in a poll from Dec. 3-6, and since then the New Democrats have held steady with 35% support. The Liberals were up eight points to 25%, while the Bloc was down five points to 24%. The Conservatives slipped four to 11% and the Greens were up one to 3%.

With such a large sample, one has to give Léger's numbers the most consideration. But they aren't much different from the other polls, who ranged between 29% and 34% for the NDP, 19% to 31% for the Liberals, and 20% to 26% for the Bloc.

The Liberals led among non-francophones with 45% to 31% for the NDP and 13% for the Conservatives, suggesting the party would stand a good chance for a return to prominence on the island of Montreal.

Using the 338-seat map (which is, at this point, an estimate considering that the boundaries have yet to be finalized and are still in the process of being tweaked), the Conservatives would be denied a majority in all three polls but would still win the most seats.

Their best result was in the Abacus poll, as they would win 156 seats to 109 for the New Democrats, 60 for the Liberals, 12 for the Bloc, and one for the Greens. With 21 seats, the NDP did exceptionally well in B.C., while the Tories took 69 seats in Ontario.

In Forum's poll, the Conservatives would win 136 seats to 101 for the Liberals, 85 for the NDP, 15 for the Bloc, and one for the Greens. The Liberals would take 44 seats in Ontario and seven in the Prairies, while the NDP would be reduced to 31 in Quebec.

And in Nanos's poll, the Conservatives would win 152 seats to 90 apiece for the NDP and Liberals, with five going to the Bloc and one to the Greens. The Liberals would win the most seats in B.C. with 15.

With Léger's numbers in Quebec, the New Democrats would hold 50 seats to 18 for the Liberals, seven for the Bloc, and only three for the Conservatives.

If we combine the seat projections for all four polls, we get some interesting seat ranges (using the best and worst individual results in each region).

The ranges are narrowest in Alberta and Atlantic Canada, with the seats relatively set in terms of likely winners (one of the parties needs to collapse or breakthrough for major changes). Quebec and British Columbia are the wildcards due in large put to the volatile Liberal numbers: if the party tanks in B.C., the NDP can win a lot of seats. If the party does well in Quebec, they take a lot of seats from the NDP. There are also many seats up for grabs in Ontario (particularly for the Liberals) and the Prairies as well. Things are far from settled.

Justin Trudeau could shake things up, of course, with Forum's poll putting the Liberals under Trudeau at 41% to 30% for the Tories and 20% for the NDP, with leads in Ontario, Quebec, Atlantic Canada, and the Prairies (of all places). That is a definite majority.

The leadership race is the likely cause for such odd numbers for the Liberals. Until the race concludes in April, we can probably expect odd results from time to time. But what will the polls look like after April?
Posted by Éric at 10:19:00 AM