Three-way race in Newfoundland and Labrador? 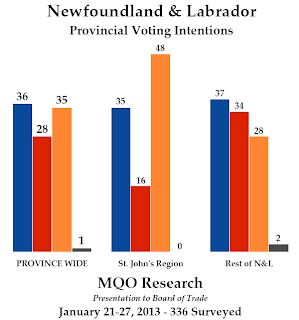 Newfoundland and Labrador is a bit of an enigma - for a province as small as it is, a lot of polling is actually done. In addition to the CRA quarterly reports, we have this poll from MQO Research (which apparently polls on a monthly basis) and one from Environics last summer. By contrast, polls out of Saskatchewan, Manitoba, New Brunswick, and Nova Scotia are far less frequent, despite their larger populations.

The results from these polls are not exactly consistent. CRA has been showing that the PCs have led without interruption since time immemorial (well, perhaps not) and by decisive margins. The closest race they have recently had gave the Tories a 12-point edge over the NDP in August and September 2012. But Environics made some waves in June 2012 by giving the NDP a three-point edge, and now MQO puts the two parties within one point of each other on a small sample of 336 people.

The poll gives the Tories 36% support, compared to 35% for the NDP and 28% for the Liberals. Drawing from such a small sample, conceivably any party could be in front. But for MQO, this is actually an improvement of the situation for the PCs, as they had the NDP leading the governing Tories for much of 2012. They just didn't release those numbers - these were presented to the Board of Trade in Newfoundland and Labrador and picked up by the media in the province.

So what is going on? CRA and MQO have apparently been in the field at the same time but have had different results. It could be methodological. It isn't clear how MQO is doing their monthly polling: their Atlantic Matters monthly report is done with an online panel while their monthly omnibus survey has an "open format". I'm not sure what that means, but since their website stipulates that the Atlantic Matters survey is done online while the omnibus is not described that way, it is probably safe to assume that the omnibus is not done online.

I haven't been able to find out whether this poll was done online or not, but since the Atlantic Matters report is sold as having federal and provincial voting intentions data, it is possible that this poll was done online. This would seem to jibe with Environics's survey of last year, which was also done online and had a similar result to what MQO was showing in their trend line slide at their presentation.

UPDATE: I misremembered that Environics poll from June. Turns out it was done by telephone, which makes the differences in results all the more puzzling.

The MQO poll shows a regional breakdown that gave the New Democrats a strong edge in the St. John's Region, with 48% support to 35% for the PCs and 16% for the Liberals. In the rest of the province, however, the race was very tight: 37% for the PCs, 34% for the Liberals, and 28% for the NDP. This suggests that the New Democrats are in a good position to win a lot of seats in the capital and hold their seats in the rest of the province, while the Liberals are competitive outside of St. John's. That puts the Tories in a bind.

Note that this poll also includes 1% support for the non-existent provincial Green Party.

With these numbers, the seat result would be very close. The model gives the NDP 18 seats to 17 for the Progressive Conservatives and 13 for the Liberals, but the results are close enough that the PCs could win between nine and 23 seats, the NDP between 13 and 21 seats, and the Liberals between 11 and 19 seats. So, there is the potential for better distribution of votes to give any of the three parties the most seats (though the Tories and NDP are in a better position).

The New Democrats win most of the seats in and around St. John's, and take a handful in the rest of the province. The Tories win seats throughout Newfoundland, while the Liberals take most of their seats west of the Avalon and Burin peninsulas. As you can see, it would not take much of a regional "surge" to tip things dramatically in one direction or the other.

In terms of who Newfoundlanders and Labradorians see as the best person to be premier, Kathy Dunderdale was ahead with 46% (unlike most other surveys, MQO presented this information after removing the undecideds and none-of-the-aboves). Lorraine Michael of the NDP had 31% while Dwight Ball, interim leader of the Liberals, had 23%. It would seem that Dunderdale is somewhat more popular than her party, particularly outside St. John's.

The next election in the province is years away, but it is interesting how voting intentions have moved back and forth since the last election, and how the NDP is showing some staying power in a province where they did not have much success before 2011. The next leader of the Liberals could change things, and Gerry Byrne and Scott Simms, Liberal MPs in the province, have both indicated their interest in the job. Out of all the provinces scheduled to go to the polls in 2015, Newfoundland and Labrador could be the most fascinating.
Posted by Éric at 10:33:00 AM