Earlier this week, Abacus Data released the first major poll of Ontario voting intentions following the selection of Kathleen Wynne as the new leader of the Ontario Liberal Party. The result was a close race - about as close as it can get between three parties. The electoral outcome of such a distribution of votes would be just as tight. 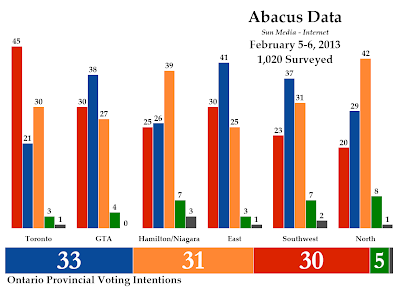 Abacus was last in the field provincially in Ontario on Dec. 7-8, and since then the Progressive Conservatives slipped two points to 33%, while the Liberals gained two points to reach 30% support. The New Democrats were unchanged at 31%, as were the Greens at 5%.

These shifts in support for the Tories and Liberals are within the margin of error (or would be if this was a standard probability sample). In fact, the lead the Tories hold over the NDP as well as the Liberals is also within the margin of error. Though the PCs would have the greatest chances of emerging ahead of the others if a vote was held on Feb. 5-6 (when this poll was in the field), the NDP and Liberals could have also won without this poll being "wrong". It is that close.

Unfortunately, Abacus's last poll did not have detailed regional breakdowns (only GTA and the rest of Ontario), so a look at regional trends since December is not possible.

The New Democrats were ahead in northern Ontario with 42% to the Tories' 29% and the Liberals' 20%, while they were also in front in the Hamilton-Niagara region with 39% to 26% for the PCs and 25% for the Liberals.

The Liberals held the lead in Toronto, with 45% to 30% for the NDP and 21% for the Tories. All of these regional results are rather conventional.

The seat projection model for Ontario has been updated to be capable of incorporating regional polling data. After comparing the regional definitions of each of the pollsters active in Ontario, I have adopted a regional breakdown that will be the easiest to use despite every firm's definitions being slightly different.

With this poll's regional data, the model returns 41 seats to the Progressive Conservatives and 33 apiece to the NDP and Liberals.

The PCs win 30 of their seats in eastern, southwestern, and northern Ontario, while being shutout of Toronto. The NDP wins seats in each region of the province, but primarily in the north, in southwestern Ontario, in Toronto, and in the Hamilton-Niagara region. For the Liberals, 27 of their 33 seats come in and around Toronto.

This seat breakdown makes for an interesting hypothetical. Would Tim Hudak be able to form a government with 41 seats? He could turn to the Liberals or the NDP for support. Or, the Liberals and New Democrats could work together to form a government with a majority of seats. But who would be the Premier? Kathleen Wynne, who already holds the title, or Andrea Horwath, who narrowly had more of the popular vote?

Ontarians would seem to prefer Horwath, though Wynne is by no means disliked by the population. Abacus found that Horwath has the best favourability ratings of the three leaders, with 34% expressing a positive impression of her. Another 32% said they had a neutral impression, while only 21% had a negative impression. But that is not much different from Wynne's results: 30% positive, 31% neutral, and 21% negative.

On who is the best person to be premier, 23% selected Horwath, another 23% selected Wynne, and 20% selected Hudak. Again, a very close result but this would seem to suggest that Hudak is polling worse than his own party (otherwise, he would be the choice for best premier by a whisker).

It is an interesting situation. The Progressive Conservatives have the strongest and seemingly most immovable base, and a good regional distribution of votes that wins them a lot of seats. But Hudak is not on the verge of breaking through among the population, limiting his party's potential gains. The Liberals have the larger base of people who have supported them in the past, and Wynne has good numbers so far, but they have been in government for a very long time and they are struggling to move the dial outside of Toronto and its environs. And the New Democrats have perhaps the most fragile assembly of supporters (as many of them are moving towards the NDP from other parties), though Horwath gives them a lot of upside and the party is doing relatively well in every region of the province. It wouldn't take much to give any one of these leaders the advantage in an election campaign.
Posted by Éric at 10:11:00 AM