If anyone thought that the B.C. Liberals were inexorably on the rise, a poll by Justason Market Intelligence put a damper on that, as it put the B.C. New Democrats 22 points ahead of the governing party. Newer polls will tell us if that turns out to be an outlier result, but the forecast now gives the New Democrats a 96.4% chance of winning the popular vote on May 14, up from 93.4%.

The projection as of Feb. 1 gives the NDP 48.2% of the vote and 66 seats, up from 46.5% and 56 seats that had been projected with the poling data running up toJan. 21. That is a big gain in seats for the NDP, primarily in metropolitan Vancouver where the Liberals have dropped more than six points. Province-wide, the Liberals are projected to have 30% support and would win 18 seats, a drop of 2.9 percentage points. If an election were held today, the NDP would have a 100% chance of winning the most seats - the gap is simply too large for polling or modelling error to miss the call.

The B.C. Conservatives are up 0.9 points to 11.6%, while the Greens are up 0.3 points to 8.5%. Both parties are projected to win no seats, but their projected high does put them in a position to win one. The NDP and Liberal seat ranges still do not overlap, at 49-76 and 6-36, respectively.

The forecast for May is not good for the Liberals, as their forecasted high is only 39% support. That could give them as many as 56 seats, however, so a win is still not out of the question. But the time remaining for the Liberals is slipping away, as are their odds of prevailing. 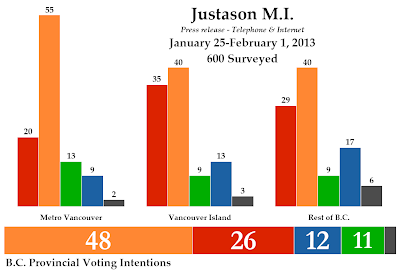 I analyzed the Justason poll and a leader poll by Angus-Reid for The Huffington Post Canada, and I invite you to read that article.

Justason was last in the field between Sept. 24 and Oct. 1, and since then the NDP did not budge at 48% support. The Liberals were down two to 26%, the Conservatives up three to 12%, and the Greens were down two to 11%.

With less than 100 days to go before the vote, the B.C. Liberals cannot afford to be taking a step backwards. And as the NDP vote looks rock solid, there are few prospects for further gains. If Christy Clark turns things around, it will be a remarkable comeback.
Posted by Éric at 2:27:00 PM