Earlier this week, the latest federal polling results from EKOS were released by iPolitics.ca, showing the Conservatives, NDP, and Liberals in a close three-way race and all three parties under 30% support - sort of. 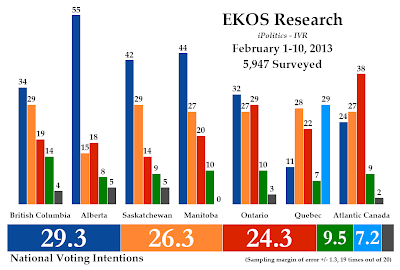 EKOS has a tendency to have high results for both the Greens and "others", which drags the support of the three main parties down. In their last three polls, the combined support for the Conservatives, NDP, and Liberals averaged 81.4%, compared to an average of 88% in the polls conducted by other firms over that time. So, it is no surprise that this 9.5% for the Greens is the highest recorded in any poll since July 2012 (an EKOS survey) or that the Conservatives have been scored at under 30% support in only two of 89 polls since the last election (both by EKOS).

EKOS's response to this is to provide their estimation of support from actual voters, contrasting each party's support among the general population to those that actually go out and vote. EKOS has had more success with this method in past elections than their results from the general population. This makes sense. The people who vote are not the same as the average Canadian. EKOS estimates likely voter support at 34% for the Tories, 30% for the NDP, 21% for the Liberals, and 7% for the Greens. That is much more in line with what other polls have been showing.

Which brings us to an important question: are the other polling firms already tweaking the numbers based on expected turnout? Is the reason that EKOS's results are consistently among the most out-of-step with other firms that they are the only ones reporting unadjusted results for the general population? I have asked some polling firms in the past about this. I'm often told that their weighting schemes are proprietary information, or that they do a little bit of tweaking for turnout. Just how much they do we don't know, and that is the kind of information that polling firms do not want to reveal - their "secret sauce" for getting their polls to match electoral results is the one thing that can differentiate themselves from other firms.

Polls in the United States do break things down by how likely respondents are to vote, and according to the methodology that Nate Silver has explained in the past he values the most specific information possible: polls of decided voters over polls with decided and leaning voters, and polls of likely voters over only registered voters, etc. Here in Canada, we are rarely treated to that level of specificity. Perhaps we should be.

Back to the results of the poll (for the general population). The Conservatives held statistically significant leads in Alberta and Manitoba, with 54.9% support in the former and 43.6% in the latter. The Liberals trailed in Alberta with 18%, followed by the NDP at 14.8%. Alberta is an interesting case as the Liberals have been placed ahead of the NDP in half of the polls released since October. In Manitoba, the NDP was second with 26.7% to 19.5% for the Liberals.

The Conservatives also had the edge in Ontario with 31.7%, a drop of 4.2 points since November-December. That is the lowest result for the Tories I have on record, stretching back 206 polls to November 2010. Again, the "likely voter" calculation could be significant here. The Liberals trailed with 28.9%, while the NDP was third with 26.5%.

The New Democrats placed first in no region of the country, but were a close second in Quebec with 28.4%, an increase of 4.3 points. The Bloc was in front with 29.2%, while the Liberals were down 3.4 points to 22% and the Conservatives were down 4.2 points to 10.5%, the lowest the Tories have scored in Quebec since April 2012.

With these numbers, and using the proposed boundaries for the 338-seat map (though not incorporating some of the latest boundary changes that have been made, so this is more of an estimate), the Conservatives would win 135 seats to 91 for the Liberals, 75 for the NDP, 36 for the Bloc, and one for the Greens.

Despite being second in the popular vote nationwide, the NDP falls to third in the seat count due to Quebec. But projecting there is a bit problematic: the boundaries have changed drastically and a lot of the ridings are decided by a percentage point or two. Incumbency could give the NDP a bonus, perhaps bumping them up some 10 seats or so.

Interestingly, EKOS included ratings for Justin Trudeau, presumptive successor to Bob Rae. He had a net score of +9, with an approval rating of 33% (62.8% among Liberals) and a disapproval rating of 24%. In fact, his "don't know" score was, at 39%, actually lower than Mulcair's (43.3%). He isn't on the job yet, and already Canadians have a better idea of what they think of him than Mulcair.

Broadly, this poll is consistent with what we have been seeing for months. The Conservatives hold a narrow lead while the Liberals seem to be on the upswing. The Tories are still in front on the Prairies and in Ontario, while the race is close in B.C., the NDP's support in Quebec is fragile but by no means weak (Mulcair had a higher approval rating here than Trudeau), and the Liberals lead in Atlantic Canada. The difference between EKOS's likely voter and general population results is instructive, however. The Conservatives can still expect to do better than the polls suggest in an election, while the Liberals appear to be suffering from the same sort of effect that has historically bumped the Greens down at the ballot box. That is something the next leader of the Liberal Party will need to prevent.
Posted by Éric at 10:50:00 AM