Time running out for the B.C. Liberals

The projection and forecasts for the upcoming election in British Columbia still show the B.C. New Democrats under Adrian Dix heavily favoured to win on May 14, with a 95.5% chance of winning the popular vote with less than 100 days to go before ballots are cast.

A new poll by EKOS Research for iPolitics showed that the NDP was still well in front and caused little change in the forecast. The New Democrats dropped slightly by 2.4 points to 45.8%, while the B.C. Liberals are down 0.3 points to 29.7% in the projection for Feb. 10. With a small uptick in metropolitan Vancouver (worth 2.7 points for the Liberals), Christy Clark's party picked up one seat in the projection. The NDP is now projected to win 65 seats, with the Liberals taking 19 and one independent being re-elected. If an election were held today, the New Democrats would have a 97.6% chance of winning it.

The projection ranges do not envision anything other than an NDP majority to be in the cards with current support levels, though the forecast still considers the possibility of a Liberal win plausible. It is far from likely, however. Margins of this size are rarely overcome in so little time. 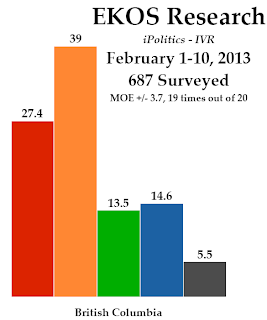 The forecast ranges are quite wide, however, due to the volatility introduced by the EKOS poll and its unusual results.

EKOS was last in the field Nov. 20-Dec. 3. That poll was not released to the public at the time, but since then the New Democrats dropped 2.2 points to 39% while the Liberals were up 3.5 points to 27.4%. The Conservatives were up 3.2 points to 14.6%, and the Greens were down 5.7 points to 13.5%. Fully 5.5% of respondents said they would vote for an independent candidate or another party.

Only the drop in Green support appears to be statistically significant, but that is understandable. When EKOS was last in the field, the federal by-election in Victoria in which the Greens finished a close second was taking place. It is likely that had an effect on the numbers.

That high "other" result might be due to the large number of well-known independent candidates that will be running in the next election. But in EKOS's last poll, when there weren't as many independent candidates known to be running, support for other parties was still an unusually high 4.3%. It must be said that higher "other" results are par for the course for EKOS, though that might actually do them good in this election.

The lead for the NDP is smaller than other polls have shown, but the demographics work to their advantage. The New Democrats lead by a margin of 46% to 27% among 45-64 year olds and even by two points (37% to 35%) among British Columbians over the age of 65. These are the age groups that do most of the voting.

If we look at it another way, we see that Dix has less of a balancing act to play. The B.C. Liberal electorate votes 54% Conservative and 39% Liberal at the federal level. By comparison, the B.C. NDP's supporters are 63% NDP at the federal level, and only 13% supporters of the federal Tories and Liberals apiece. It makes for an easier 'coalition' of voters to keep together.

The EKOS poll might be a little out of step in the details, but it is broadly in line with what other surveys have shown: a double-digit lead for the New Democrats and relatively significant support levels for both the Conservatives and Greens. It is also in agreement with other polls that the changes in support over the last few months have been marginal at best. That is good for the NDP, but not so good for the B.C. Liberals.
Posted by Éric at 4:03:00 PM