Late last week, the Toronto Star released the latest Ontario provincial poll by Forum Research. It showed that the Progressive Conservatives held a wide lead over the Liberals, who had recovered, and the New Democrats, who had tumbled. Yesterday, Nanos Research released their latest poll showing a close race. A week separated the two polls - could things be that fluid? 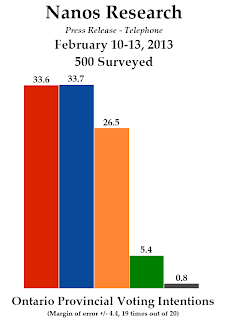 Let's start with the Nanos poll which, though older, is the most recently released. Nanos has been out of the field in Ontario for some time, with their last survey dating to Aug. 11-16, 2012. Since then, there has been no real movement for the Liberals or PCs: the Tories were down one point to 33.7% and the Liberals were down 0.4 points to 33.6%. On sample sizes of 500 respondents, that is less than insignificant movement.

The New Democrats gained 4.4 points to 26.5%, which is still within the margin of error. The NDP gain does put Nanos back in line with the other firms, however, which is good to see. Nanos was the odd-man out when it came to Ontario, putting both the PCs and Liberals above 30% and the New Democrats well behind, in opposition to the numbers from Forum, Abacus Data, and Innovative Research.

What is fascinating about Nanos's poll report is the chart that shows voting intentions all the way back to 2001. What is striking is just how little the PC vote has moved over the last 12 years. With few exceptions, the PCs have always been between 30% and 40% over that time, and were overwhelmingly hovering around 35%. That is a very solid, if immovable, chunk of the electorate. They can't seem to break out of that 1-in-3 range for more than a few months at a time.

The chart also shows how much of the movement of the Liberals and New Democrats is correlated. It would seem that, aside from a small proportion of Ontarians who switch between the Tories and Liberals, much of the vote swapping is taking place between the New Democrats and Liberals. This would suggest - and it is no shock to say it - that the Liberals have more to gain by trying to push down the NDP than they do the Tories.

But as it stands, the Liberals have better vote efficiency than the PCs and can beat them with a near tie. With these province-wide numbers, the Liberals would likely win 45 seats to the Tories' 37, and (considering the potential for error in both the polls and the seat projection model) have a little better than a 70% chance of taking the most seats. The New Democrats would win 25 seats. 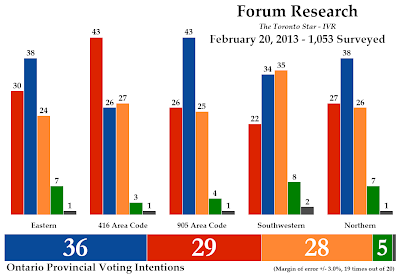 The Forum poll shows a much different race, with the Progressive Conservatives holding an outright lead with 36%. The Liberals trailed with 29% and the NDP with 28%.

That represented a two point gain for the Liberals since Forum's last poll (pre-convention) of Jan. 23-24. The PCs were up four points while the NDP was down seven. Both of those shifts are outside the margin of error.

Are the two polls contradictory? Not necessarily. Nanos's poll was very similar to the other ones that were published by Innovative, Abacus, and EKOS Research at the end of January and earlier this month. It could very well be that in the week between Nanos's poll (which ran until Feb. 13) and Forum's poll (which was conducted on Feb. 20) the electorate shifted a little to the advantage of the Tories. The disparity in the results is not large enough that it can't be explained away by statistical wobbling and methodological biases (with a little bit of actual movement as well), but it does suggest that the Ontario electorate is volatile at the moment. This should be expected, considering that Kathleen Wynne is still feeling her way forward as premier.

But whereas the Liberals had better province-wide vote efficiency than the Tories in the Nanos poll, in the Forum poll the New Democrats put their regional numbers to better use. Nevertheless, the PCs would likely win a slim majority of 56 seats, and have more than a 9-in-10 chance of winning the election. The NDP would take 28 seats (10 of them in southwestern Ontario) while the Liberals would win 23 (18 of them in urban Toronto and Ottawa).

A few points here or there makes a big difference. But Wynne is off to a good start when we look at her personal numbers.

She scored better than Andrea Horwath and Tim Hudak on questions of trust, competence, and having a vision for Ontario in the Nanos poll. Combining these scores gives the Nanos Leadership Index, and it puts Wynne ahead with 66.8 points to 54.7 for Horwath and 46.7 for Hudak. Wynne has improved upon Dalton McGuinty's numbers by an average of three points in each category (9.3 points overall), while McGuinty's departure has opened the door for Horwath. She made a gain of almost six points per category (17.2 points overall) since Nanos's last poll in August. Hudak has hardly budged, but dropped almost two points per category and 5.8 points overall on the leadership index.

If we expressed the leadership index as a share of the total (removing "none of the aboves" and unsures), we get Wynne at 38%, Horwath at 31%, and Hudak at only 26%. That means that both Wynne and Horwath are polling better than their own parties, while Hudak is polling worse.

Forum's approval ratings suggest the same thing. Wynne scored a 36% approval, 15 points more than McGuinty did in his last poll as premier. Her disapproval rating, at 30%, was 41 points lower. Still, 35% have yet to form an opinion but Liberals like her: 67% approve (19 points up on McGuinty), while only 8% disapprove.

Taken together, this would indicate that both Wynne and Horwath have some upside going into a hypothetical election campaign, while Hudak still has the potential to drag his party down. But his numbers remain solid while the Liberals and NDP oscillate. Wynne has moved her party upwards a few ticks and Horwath has dropped, but the movement is still not enough to put either one in a definitive position. It makes an election campaign a huge gamble for everyone.
Posted by Éric at 10:17:00 AM