B.C. NDP gains outside of Vancouver

A new poll this morning by Angus-Reid and reported by The Globe and Mail shows the B.C. New Democrats maintaining a wide double-digit lead over the B.C. Liberals. They are still poised to easily win the May 14 election, with the probability of the New Democrats winning the popular vote remaining unchanged at 95.5%.

The projected Liberal and NDP vote ranges do not overlap, with the New Democrats projected to take between 44.8% and 50.4% of the vote based on current polling. The Liberals take between 28.6% and 33.8%. The wider forecast for May 14 does make it possible for the Liberals to finish ahead of the NDP, but only barely.

The poll had the effect of pushing the New Democrats up on Vancouver Island and in the Interior/North, while pulling them down in metropolitan Vancouver. In and around that city, the Liberals were up 4.6 points and six seats, though still trail at length with 33.6% to the NDP's 47.4% and 14 seats to 25. The NDP was up four points in the Interior and North to 44.2% and gained three seats in the process. The Liberals fell 0.5 points to 31.4%, while the Conservatives were down 2.4 points to 14.9%. On Vancouver Island, the NDP was up 4.7 points to 52.7% and are projected to sweep the island. The Liberals were down 3.7 points to 25.2% while the Greens were up 4.9 points to 14.2%.

The chart to the left shows the problem for the B.C. Liberals. The polls have shown very little movement since November, four months ago. Fewer than 80 days remain before the next election, or less than three months. It will take something extraordinary to move the Liberals into a winning position. The Conservative vote has not moved much, but even if it was reduced by two-thirds - all of it going to the Liberals - the Liberals would still be almost ten points behind the New Democrats. If every last Conservative vote goes to Christy Clark, she will still be almost six points behind. She needs to whittle down the NDP vote significantly, but she has been unable to do that for the past 12-17 months. Is it realistic to consider that she might in the next two-and-a-half? 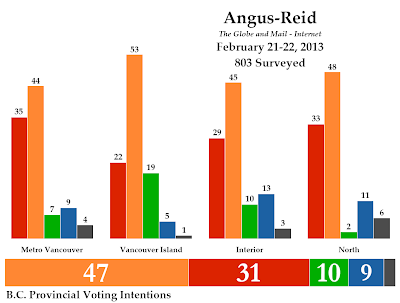 The Angus-Reid poll gives her little succor, after showing the Liberals on a modest but steady trend upwards. Since their last poll of Jan. 17-18, the Liberals have not budged from 31%, while the New Democrats were up one point to 47%.

The Greens were unchanged at 10%, while the Conservatives were down one to 9%.

Regionally, the NDP led in Vancouver with 44% to 35%, in the Interior with 45% to 29% (a drop of 10 points for the Liberals), and on Vancouver Island with 53% to 22%. Considering the sample size, the race in the north is statistically closer with 48% to 33% support for the NDP, but generally the NDP is well-placed throughout British Columbia.

The Green score of 19% on Vancouver Island is quite good, and the latest in a series of decent polls we've been seeing for the Greens on the island.

The problems for the B.C. Liberals are sprinkled throughout the other questions in this poll, if the 16-point margin isn't enough. Fully 59% feel it is time for a new government to take power, including 29% of British Columbians who voted Liberal in 2009. The NDP leads by 12 points among men and 20 points among women, and even has an 11-point edge among British Columbians aged 55 and older. That is the age group that turns out in the greatest numbers.

Clark's approval rating remains low at 31% while her disapproval has increased to 58%. And despite her recent throne speech and budget, heavily focused on portraying the Liberals as sound economic managers, Clark still trails Adrian Dix on who is best able to take care of the economy with 24% to Dix's 30%. The economy was named as the top issue by 28% of British Columbians, and on the second most important issue - health care at 20% - Dix bettered Clark by a 38% to 18% margin.

Those are some problematic numbers for Clark and the Liberals. The party trails the NDP and Clark trails Dix - it is difficult to pull off an upset when neither the party nor the leader is polling well. And the opinion of Clark is worsening: 45% of British Columbians said that their opinion of her has worsened over the last three months, while only 9% said it has improved.

The shine does appear to be coming off of Dix a little, though. His disapproval rating increased by seven points to 41% (his approval was down to 43%), much of that seeming to have come from those who said they were "not sure" of what they thought of him in January. And 28% of British Columbians said their opinion of Dix has worsened in the last three months, more than the proportion (21%) who said it improved. But his numbers are still miles ahead of Clark's.

The polls were supposed to tighten as the election approached, and they may still do so. But the last four months have hardly shown much change in how British Columbians feel about Clark's Liberals or Dix's NDP. The likelihood that minds will drastically change over the next few months seems low - unless something drastic happens.
Posted by Éric at 3:28:00 PM