While we didn't have any federal polls in the month of July, there were four national polls (and one Quebec poll) released in the month of August. This means a return of the monthly polling averages. 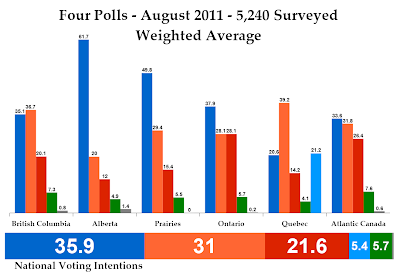 In August, the weighted average of polls totalling 5,240 respondents (in addition to the 1,000 polled in Quebec by Crop) puts the Conservatives at 35.9% support, down 5.4 points since the last monthly average in June 2011.

The Greens have gained 1.5 points and stand at 5.7%, while the Bloc Québécois is at 5.4% nationally.

In British Columbia, the New Democrats had a narrow lead in August with 36.7%, up six points since June. The Conservatives dropped a massive 13.2 points to 35.1%, while the Liberals were up 6.9 points to 20.1%. The Greens had their second-best result in the country with 7.3% support. These monthly averages would result in 139 seats for the Conservatives, 109 for the New Democrats, 56 for the Liberals, three for the Bloc, and one for the Greens.

The Conservatives win 15 seats in British Columbia, 27 in Alberta, 19 in the Prairies, 52 in Ontario, 12 in Quebec, 13 in Atlantic Canada, and one in the north. That is a drop of 23 seats since the June projection.

The New Democrats win 15 seats in British Columbia, one in Alberta, six in the Prairies, 24 in Ontario, 55 in Quebec, seven in Atlantic Canada, and one in the north. That is a gain of seven seats since June.

The Liberals win five seats in British Columbia, three in the Prairies, 30 in Ontario, five in Quebec, 12 in Atlantic Canada and one in the north. That is a gain of 15 seats since June. 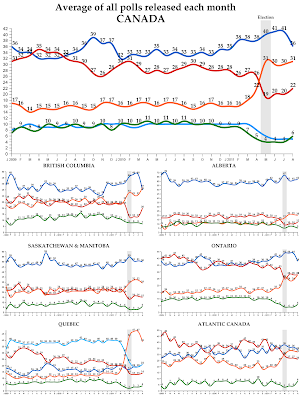 The monthly averages tracking chart shows how not too much has changed since the election, except in British Columbia. One wonders if the HST referendum played a role in the changing fortunes of the federal parties. Ontario is another source of worry for the Conservatives, as their drop there is primarily what puts them outside of another majority. It appears the party may have peaked at the right time.
Posted by Éric at 11:44:00 AM