Note: An analysis of ThreeHundredEight's final projection will be posted Monday morning.

Three final polls saw the light of day on this, the last day of the Alberta campaign. Forum's was reported in The Globe and Mail this morning, while Angus-Reid released theirs less than an hour ago. It was taken on Apr. 20-21, however, whereas the very last poll of the campaign, again by Forum, was conducted today. It shows a very close race. 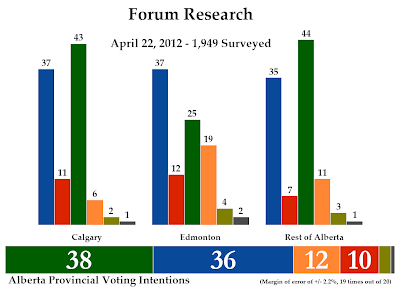 Forum puts Wildrose at 38% support to 36% for the Progressive Conservatives, 12% for the NDP, 10% for the Liberals, 3% for the Alberta Party, and 1% for other parties.

This is quite a change from their polling conducted yesterday. Forum has Wildrose down three points while the Tories are up four. The gap has narrowed to two points from nine, according to these numbers.

The big sea change that Forum has is a gain by the Tories in Edmonton. In their polling completed yesterday, the PCs were at 31% to 30% for Wildrose. The numbers are now 37% to 25% with the Tories well ahead. The gap is also smaller in Calgary (from 12 points to six) and in the rest of Alberta (from 16 points to nine), but it is in Edmonton where things have shifted the most.

Is Forum capturing last minute second thoughts? They are the only firm to have done any polling today. Weekend polling always comes with some risk and as Forum now stands alone going into voting day (all other polls put Wildrose at 41% with the Tories in the mid-to-low 30s), and they will either sink or swim. If they have it right, then we are in for a long night tomorrow.
Posted by Éric at 11:39:00 PM