Two more polls have been released over the last few days, confirming that Wildrose holds a substantial lead over the Progressive Conservatives. Accordingly, Wildrose is now projected to win 44 seats and a slim majority government. 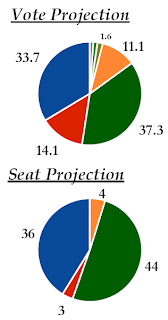 Wildrose is now projected to take 37.3% of the vote, a gain of 0.9 points since the last update of 29 March. The Progressive Conservatives have slipped 1.5 points to 33.7%, putting them almost four points behind Wildrose.

This has resulted in Wildrose being bumped up to 44 seats, the bare minimum for a majority government in the 87-seat legislature. The Tories are down to 36 seats, putting them in the role of the Official Opposition.

The Liberals have gained one point and would be projected to take 14.1% of the vote if an election were held today. This has increased their seat haul to three seats from only one.

The New Democrats are virtually unchanged, their support increasing 0.1 points to 11.1% and four seats.

The uncertainty in the polls is still somewhat high, and will be until newer polls confirm what the last three have suggested. This volatility puts the Wildrose range at between 33.3% and 41.3% of the vote, overlapping positively with the Tories' range of 28.7% to 38.7%. The Liberals are projected to take between 11.6% and 16.6% of the vote, while the New Democrats stand at between 10.0% and 12.1%.

This gives Wildrose and the Progressive Conservatives are very wide range, though an outcome close to the projected result is the most likely. Nevertheless, Wildrose's range stands at between 20 and 70 seats while the Tories could take between 12 and 64 seats if an election were held today. That may not be very helpful, but the polls are still diverging wildly. The most recent data, however, points to a Wildrose majority.

The Liberal range has increased significantly, and they could take between zero and 10 seats. The latter result would be quite good for the Liberals, as it would mean an increase in their representation in the legislature. The NDP's range is between two and eight seats, thus ensuring that they will maintain or increase their own representation. In that sense, as the Liberals could still be shut out, the NDP is in a much better position.

Wildrose has made the biggest gain in Calgary, increasing its projected support by 2.2 points to 43%. They now hold a double-digit lead over the Tories in the city, as they have slipped 2.1 points to 31.5%. Wildrose is projected to take 21 seats to only six for the Tories. The Liberals are up 0.6 points to 14.1%, putting their high range in the city at two seats. They are still more likely to win none, however.

In Edmonton, the Liberals have made the most significant gain, increasing their support by 1.1 points to 18.2%. They are still well behind Wildrose, however, which is up 0.4 points to 26.9% in the capital. The Progressive Conservatives lead with 34.5%, down 1.2 points. The New Democrats are up 0.2 points to 16.5%, but could place as high as second with 21.1% of the vote and seven seats.

In the rest of the province, Wildrose has actually slipped. They've dropped 0.3 points to 42.7%, though they have still gained ground on the PCs as they are down 0.9 points to 34.2%. The Liberals and NDP have both gained in the region, though both are also below 10%.

Abacus Data's poll is the most up-to-date added to the model, but like Forum and Campaign they are using the IVR model for this election. They show Wildrose leading with 41%, an incredible 12-point gain since their last poll of 5-7 March. The Tories are down six points to 28%, while the Liberals and NDP are each down two points to 16% and 12%, respectively.

The Tories have shed support in the two cities (though they still hold a narrow lead in Edmonton), but have actually held firm in the rest of the province. There, the Liberals and NDP have dropped away. Have rural Albertans recognized the race as being only between the PCs and Wildrose?

Campaign Research also released a poll, echoing the findings of Forum and Abacus. The firm was recently in the news for the calls to Irwin Cotler's riding, but the level of detail about their methodology is commendable (5% response rate on IVR calls, for example) and their findings are well within the norm.

They have Wildrose in the lead with 39.6% of the vote to 30.3% for the Tories, 13% for the Liberals, and 11.6% for the NDP. Here again the Tories still lead in Edmonton, though it is a close four-way race. Wildrose is well ahead in Calgary and running away with it in the rest of the province.

Undoubtedly, Wildrose has the momentum after Week One. Will they still have that momentum after Week Two? Things are going smoothly for the party, and they are benefiting from the clumsy campaign being put on by the Progressive Conservatives. Unless something happens on the campaign trail, Wildrose might be able to maintain this momentum up until the debate. That could be the turning point (or nail-in-the-coffin) of the campaign.
Posted by Éric at 10:33:00 AM