Another poll has been added to the pile, and it shows that Wildrose's momentum from the first week of the campaign has carried over to the second. Danielle Smith's party is now projected to win a comfortable majority of seats. 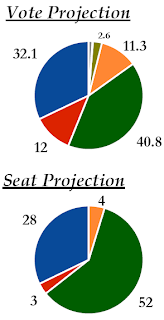 Since the projection of 1 April, Wildrose has picked up eight seats and 3.5 points, and is now projected to win 52 seats and 40.8% of the vote. This puts them well ahead of the Progressive Conservatives, who have dropped eight seats to 28 and 1.6 points to 32.1% of the vote.

The most consequential shift in support has taken place in Calgary, where Wildrose is up 1.7 points to 44.7% support. They are now projected to win 25 seats, up four from the last projection. The Tories have dropped 0.9 points to only 30.6% in the city, and are projected to hold on to only two seats (though they could win as many as eight). The Liberals dropped 2.2 points to 11.9%.

And in the rest of the province, Wildrose has picked up four points and three seats. They sit at 46.7% of the vote in this region and are projected to win 21 seats. The Tories are down one point to 33.2%, while the Liberals have fallen 3.5 points to only 6%. The New Democrats sit comfortably in third with 11.9% of the vote, a gain of 2.3 points.

As the polls have begun to align, the degree of uncertainty has decreased. This means that Wildrose is now projected to win outright, without their ranges overlapping with that of the Tories. Wildrose should win between 42 and 66 seats at these levels of support, putting them almost entirely in majority territory. The Tories should win between 16 and 41 seats, suggesting that, if an election were held today, they would have no chance of winning it.

The New Democrats are projected to win between two and seven seats, while the Liberal high range has dropped to six seats from 10. The NDP, then, has the inside track on becoming the third party in the legislature.

With Wildrose gaining so much support between now and the 2008 election, the projection model has a few quirks. As Wildrose took only a small portion of the vote in the last election, their gains are amplified in ridings where the party has done moderately well in that election and in by-elections since. Floor-crossers are also seeing their numbers inflated. As the model uses a manner of proportional swing, this is what can happen. That's why Wildrose can be projected to win 70.5% of the vote in Airdrie and 86.1% in Cardston-Rocky View. Will Wildrose actually get that high of the vote share in these two ridings? Probably not, but what can be taken from this is that the Wildrose candidates are very likely to win.

But anyone who says that huge increases of support from one election to the next make it impossible to accurately project a party's performance is wrong. Individual oddities can occur, however. In the 2011 federal election, and with the correct province-wide vote numbers in Quebec, the projection model would have pegged NDP support in Outremont at 76.4%, rather than the 56.4% that Thomas Mulcair actually got. This occurred because NDP support in Quebec grew by leaps and bounds since 2008 but Outremont was already a strong NDP riding. On the other hand, even these exceptional cases can be quite accurate. Gatineau was a good NDP riding in 2008, and so the party would have been projected to take 65.8% of the vote in 2011. That might have seemed high in what had previously been a close race, but in the end the NDP took 61.8% of the vote in the riding.

Province-wide, and again with the right vote numbers, the model would have given the NDP 60 seats in Quebec. They actually won 59. This shows that, even when a party goes from zero to 60 in one election, a proportional swing model can cope.

The poll from ThinkHQ is very welcome, as it confirms the findings of the three polls taken shortly after the election was called. Consistency is good, especially since ThinkHQ uses an online panel, as opposed to the IVR method used by the other three firms. That gives a mix of methodologies showing the same results.

Since ThinkHQ's last poll, Wildrose is up 10 points while the Tories are down six points, to 43% and 30%, respectively. After Abacus, this is the second consecutive poll putting the margin between the two parties at 13 points. The regional results also jive with everything else we've seen, namely a run-away lead by Wildrose in Calgary and outside the two main cities, and a very tight race in Edmonton.

The Wildrose balloon has not deflated yet, and if the campaign continues in the manner that it has so far it is unlikely to deflate before election day. Danielle Smith has terrific personal numbers, with an approval rating of 56% to only 32% disapproving, a far better result than Alison Redford's 48% to 43% spread. Redford's disapproval rating has been on a steady increase since she became leader, while Smith's approval rating has inched up slowly in every ThinkHQ poll since December. Leadership drives election results, and right now Smith has both hands on the wheel.
Posted by Éric at 11:53:00 AM