Though the B.C. New Democrats have been leading in British Columbia for some time, the margin between them and the governing Liberals appear to be widening. Two polls released since the beginning of April put that gap at 20 points or more. They also put the Liberals and the B.C. Conservatives in a tie. On the eve of two by-elections, this means that Christy Clark is in dire straits. 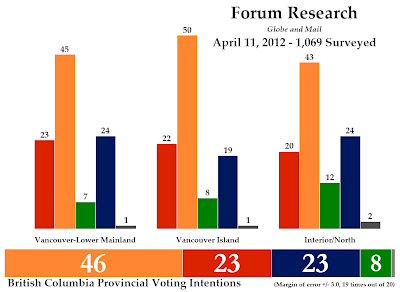 The most recent survey was conducted by Forum Research on Apr. 11. They had last been in the field on Mar. 19, and since then the New Democrats have slipped one point to 46%. That is not much of a problem for Adrian Dix, however, as that still gives him a 23-point lead over the Liberals, up two points to 23%.

The Conservatives are also up two points to 23%, putting them in a tie with the government. The Greens, meanwhile, are down one to 8%.

The NDP has uniform support across the province, leading in the Interior and North with 43% (-5), Vancouver and the Lower Mainland with 45% (-1), and on Vancouver Island with 50% (unchanged).

The Liberals and Conservatives, too, have generally uniform support. But the Conservatives have the edge in Vancouver and the Lower Mainland at 24% (+3) and in the Interior and North, where they also have 24% support. The Liberals, however, are second on Vancouver Island with 22%, up three points. They are also up three points in the Interior and North to 20% support.

If the Greens and Conservatives were closer to their 2009 levels of support, the New Democrats would still likely win with 46% province-wide. With the Conservatives dead-even with the Liberals, it is a landslide. 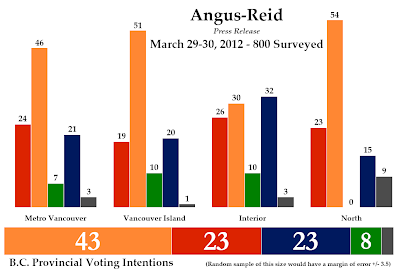 Angus-Reid's poll is somewhat older, having been taken at the end of March. But the poll comes to the same conclusions, with the New Democrats at 43%, a gain of one point since Angus-Reid's Jan. 27-29 poll.

The real indication of how things have changed over the last few months, however, is that the Liberals are down five points to 23% while the Conservatives are up four points to that level of support. The swing has been taking place almost entirely between these two parties.

The Greens are up two to 8%. That means Angus-Reid and Forum's results are identical, except for the 43% to 46% disparity for the NDP.

But regionally, things were less uniform in Angus-Reid's polling. The New Democrats lead with 54% in the North (+11), 51% on Vancouver Island (unchanged), and 46% in Metro Vancouver (+4). They are second to the Conservatives in the Interior with 30%, a drop of seven points.

The Conservatives lead with 32% (+12) in that part of the province, where most of their growth has taken place. They are also second on Vancouver Island with 20% (+8), while the Liberals place second in Metro Vancouver with 24% (-3) and in the North with 23% (-4). But the margins of error are much smaller in the regional samples, meaning that neither the Liberals nor the Conservatives have a statistically significant edge over one another in any part of British Columbia. 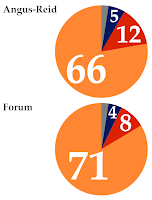 In seats, however, the Liberals get the slight edge for the role of the Official Opposition. Nevertheless, in both Angus-Reid and Forum polls the New Democrats would romp to a huge majority of 66 (Angus-Reid) or 71 (Forum) seats.

But neither of these two parties have particularly popular leaders. While Adrian Dix tops the list on the Best Premier question with 25% in Angus-Reid's polling, a drop of one point since January, Clark is down five points to 17%. John Cummins of the Conservatives is up four to 12%.

The odds are that his party will also come out on top in tomorrow's two by-elections in Chilliwack-Hope and Port Moody-Coquitlam. If we apply these two polls to the swing model for these two individual ridings, we get the following results (not a prediction!):

Of course, by-elections can be unpredictable. I will be especially looking to see how the Conservatives do. These ridings are not in the parts of the province where the Conservatives should be expected to do best, but both of these polls show that the party is competitive (at least compared to the Liberals) throughout British Columbia. Will their vote turn out? Are they a real alternative option in the province? We'll find out tomorrow night.

Neither of these seats belong to the New Democrats. It will thus be a coup if they win both, but as they are almost assured of a good result they will have a positive headline whether they win them or not. Expectations for the Liberals are already low, so the damage will be somewhat mitigated if they lose one of them. If she wins both, she may be able to start turning things around for her party. If she loses both, the decline will continue. And for the Conservatives, anything over 20% will show they are the real deal.

But neither Dix nor Cummins have nearly as much riding on these results as the premier. By-elections can be odd little one-off events that have no wider meaning, but the effect the results will have on the political mood in the province could be significant.
Posted by Éric at 8:44:00 AM