Two federal polls were released last week showing a very tight race between the governing Conservatives and the opposition New Democrats. While the two surveys differ on what kind of momentum the Tories have, both show that the NDP is making significant gains, primarily at the expense of the Liberal Party. 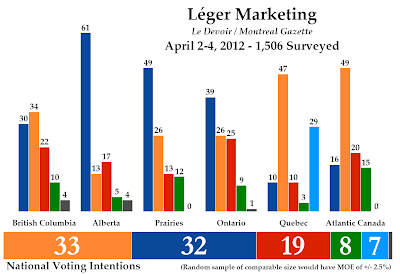 The Léger poll is the most recent, and is also the most striking. It places the New Democrats ahead of the Conservatives with 33% to 32%, a gain of seven points for the NDP since Léger's last national survey of Feb. 28-Mar. 5. The Tories, meanwhile, are down two points.

The New Democrats lead in Atlantic Canada with 49% (+18), Quebec with 47% (+20), and British Columbia with 34% (unchanged). They are running second in the Prairies and Ontario with 26% support in each (a loss of seven points in the Prairies and a gain of three in Ontario).

The Conservatives lead in Alberta with 61% (+2), the Prairies with 49% (+8), and Ontario with 39% (unchanged). They place second in British Columbia with 30%, a drop of six points since late February/early March.

Atlantic Canada has huge variations in this survey, so the region's results can probably be discounted. The big NDP leap in Quebec is not so unusual, however, as other polls have indicated that the NDP has made a major rebound in Quebec with Thomas Mulcair as leader. That the NDP has supplanted the Liberals as runner-up in Ontario is good news for the party, as they need to make more gains there. Overall, however, the Conservatives are in a strong position thanks to their big leads in Alberta and Ontario. 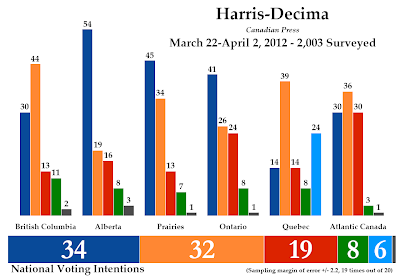 Those big leads were echoed in Harris-Decima's older poll, taken between Mar. 22 and Apr. 2. Part of the survey was conducted before the Mar. 24 NDP leadership convention, but probably not enough to have skewed the results very much.

Harris-Decima keeps the Tories in the lead with 34%, a gain of three points since their previous poll of Mar. 8-19. The New Democrats are up four points to 32%, while the Liberals are down five points to 19% support.

There are fewer unusual results in this Harris-Decima poll, at least in terms of the variations since their last survey. Both Harris-Decima and Léger agree on the situation in Ontario as well as in Quebec, while giving the NDP the lead in B.C. and on the East Coast.

The Liberals are only tied for second in Atlantic Canada with 30%, a loss of three points, while the Bloc is down 10 points in Quebec to 24%. 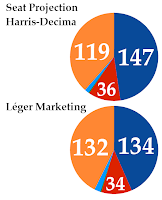 Both of these polls would result in a similar situation in the House of Commons: the Conservatives with a plurality of seats but the NDP and Liberals able to combine for a majority.

With Harris-Decima's narrow Conservative lead, the Tories take 147 seats to 119 for the NDP, 36 for the Liberals, five for the Bloc, and one for the Greens.

With Léger's narrow NDP lead, the Conservatives take 134 seats, the NDP 132, the Liberals 34, the Bloc seven, and the Greens one.

If we take the best and worst regional results for each party, we get a range of between 128 and 153 seats for the Conservatives on these numbers, with the New Democrats sitting between 108 and 143 seats. The Liberal range is between 24 and 46 seats - even a best-case-scenario results in only a minor gain of seats for the Liberals.

The New Democrats are only slightly above the 31% the party achieved under Jack Layton in May 2011, but the extra point or two makes all the difference, particularly when the Tories are down six to nine points. The NDP is in a strong position on the two coasts and looks capable of keeping (or even increasing) their representation in Quebec. But the Conservatives still have the advantage thanks to their wide lead in Ontario and the clump of seats they hold claim to between B.C. and Manitoba. Until the NDP can start to whittle away the Tory holdings in the West and in Ontario, they will have no hope of toppling the Conservatives without the help of the Liberal Party.
Posted by Éric at 12:08:00 PM