Considering the Ontario Liberal government could (but probably won't) fall as soon as Tuesday, it comes as no surprise that two polls have been released within the last 24 hours. The results, however, are surprising: Tim Hudak's Progressive Conservatives are in the lead, trailed not by the Liberals but by Andrea Horwath's NDP. 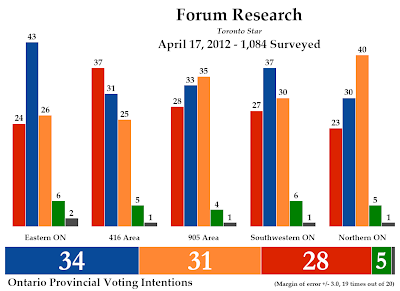 Since Forum was last in the field on Mar. 28, the Tories have held steady with 34% support. The New Democrats, however, are up one point to 31%, moving them ahead of the Liberals who are down two points to 28%.

The Greens are unchanged at 5% support.

Note that Forum combines the 416 and 905 results to get their GTA total, while northeastern and northwestern Ontario combine to give the northern Ontario total.

Each party has their region of strength, but each party is also competitive in every part of the province. This makes the potential seat result unpredictable. A few points here, a few points there, and dozens of seats could be swapped. 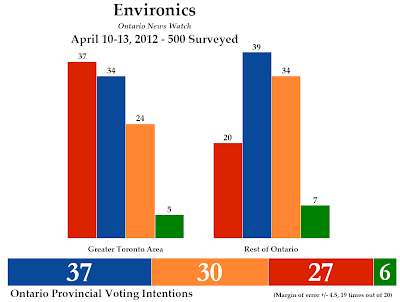 Environics, which has not released an Ontario poll since the election, agrees with the general trend that Forum has identified. In their polling, the Tories lead with 37%, followed by the NDP at 30%, the Liberals at 27%, and the Greens at 6%.

Though it is still a close three-way race, according to Environics the Tories are much better positioned. However, this survey is half the size of Forum's so the margin of error (+/- 4.5%) is quite large.

Because of the smaller sample, Environics split the regional results into the GTA and the rest of Ontario only.

In the rest of Ontario, the Tories hold a wide lead - as should be expected. They are ahead with 39%, followed closely by the NDP at 34%. The Liberals are well behind with 20%. 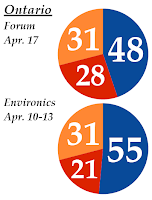 In terms of raw seat numbers, these two polls make no difference for the New Democrats. But context is very important.

With Forum's close race, the Progressive Conservatives win 48 seats to 31 for the NDP and 28 for the Liberals. That means a minority government of some kind. Would it be a Hudak minority propped up by the Liberals, or an NDP-Liberal coalition?

But with Environics' seven-point lead for the PCs, the Tories win 55 seats and a slim majority. The NDP still wins 31 seats but are left without much influence in the legislature. The Liberals are reduced to 21 seats.

But with this kind of confused jumble of a three-way race, anything could happen. The last campaign demonstrated how fickle voters can be, with the Tories having squandered a wide lead in a matter of weeks. While the PCs have committed to voting down the budget, the New Democrats should take a lesson from Tim Hudak's experience last fall. They might be riding high now, but what about after four weeks of campaigning?

It seems very likely that the NDP will support the budget after getting a few concessions from Dalton McGuinty. Only about one-third of people polled are open to having another election, and the parties themselves are heavily in debt from the last campaign. But the brinksmanship is on, and while it seems a fair bet that Ontarians won't be going to the polls this spring, it seems just as unlikely that the government will survive until 2015.
Posted by Éric at 11:45:00 AM