Due to the NDP leadership convention and the federal budget, a large amount of polling was done during the month of March. It is a difficult month to analyze, however, as the most important events took place in the final week. Though an incredible 16 federal polls surveying a total of 25,204 Canadians were released during the month, only a small handful (including two national polls) were conducted entirely after the NDP convention and before the month of April. This means that only a very small proportion of the "Mulcair bounce" is included in this monthly average. 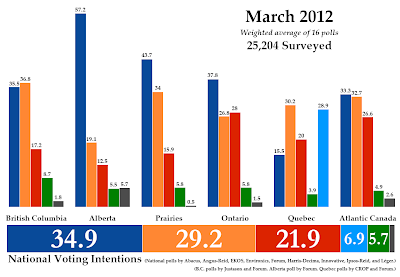 Nevertheless, through the month of March the Conservatives averaged 34.9% support, a gain of 1.7 points compared to their February average. The New Democrats averaged 29.2%, a gain of 1.1 points, while the Liberals dropped 2.2 points to 21.9% support.

For the Conservatives and NDP this represents very little change. The Tories have averaged between 33% and 36% for the last five months, while the NDP has been between 28% and 30% for the last six. This is a bit of a drop for the Liberals, who have not been this low since September 2011 (when the NDP leadership race began). The last polls of March and the most recent surveys from April, however, indicate that the NDP's numbers have jumped even more, primarily at the expense of the Liberals.

The most significant amount of change came in Quebec, and we can already expect even more of a shift in the month of April. But throughout March, the New Democrats averaged 30.2% support in Quebec, a gain of 3.7 points and a return to where they stood in January. In fact, this is the first month of gain for the NDP in Quebec since September. The Bloc Québécois picked up 4.1 points and sat at 28.9% in March, their highest since the 2011 election campaign and their fifth consecutive month of growth. The Liberals slipped 3.2 points to 20% while the Conservatives also dropped that amount of support. They averaged 15.5% in Quebec in March, their lowest score since November 2010. The Greens were up 0.1 point to 3.9%. 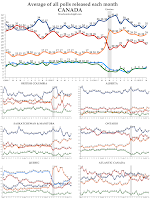 The largest NDP regional gain in March took place in British Columbia, where the party jumped 4.1 points to 36.8% support. That is their highest mark since August 2011, the last time they led the Conservatives in a monthly average. The Tories were down 0.3 points to 35.5%, generally where they have been for the last five months. The Liberals were down three points to 17.2% while the Greens were down 0.4 points to 8.7%.

The least amount of change took place in Ontario, where no one gained or lost more than 1.6 points. The Conservatives gained 1.2 points and averaged 37.8% in the province. They have been between 36% and 39% for the last five months in Ontario. The Liberals averaged 28% support, down 1.6 points. That is their lowest average result since September. The New Democrats were up 1.3 points to 26.8%, their highest result since that month. The Greens were down 0.2 points to 5.8%. 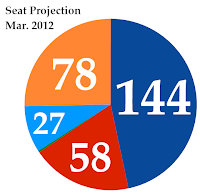 With these numbers, the Conservatives would have won 144 seats in an election held in March. That is an increase of 11 seats from the February projection. The New Democrats win 78 seats, an increase of four, while the Liberals drop 17 seats to 58. The Bloc Québécois wins 27 seats (+1) while the Greens retain their one.

The Conservatives win 18 seats in British Columbia, 27 in Alberta, 19 in the Prairies, 57 in Ontario, eight in Quebec, 14 in Atlantic Canada, and one in the north. In a 338-seat House, the Tories would likely have won 161 seats.

The New Democrats win 13 seats in British Columbia, one in Alberta, six in the Prairies, 24 in Ontario, 27 in Quebec, six in Atlantic Canada, and one in the north. They would take 84 seats in the expanded Commons.

The Liberals win four seats in British Columbia, three in the Prairies, 25 in Ontario, 13 in Quebec, 12 in Atlantic Canada, and one in the north. That would be bumped up to 64 seats on the new electoral map.

Considering that the New Democrats did not have a leader during most of the month and in the majority of these polls, there are already some good signs for the NDP here. They gained traction nationally in March and particularly in British Columbia, Quebec, and Ontario. The party was beginning to turn the corner in Quebec with the expectation that Thomas Mulcair would become the next leader, and recent polls show that the NDP might average more than 40% support in the province in April if things continue.

The Conservatives were holding generally steady in March, but bled a lot of support in Quebec and seems unable to keep the New Democrats down in British Columbia, a good place for NDP growth come 2015. But April is setting up to be worse for the government, as it is for the Liberals. March already indicated that the party is in trouble, as it took big steps backwards in Quebec and British Columbia and lost support in every other region. If the Liberals continue to place third in Atlantic Canada and lose second place to the NDP in Ontario, things will turn very sour for the party very quickly.

A last snapshot, then, of the political landscape in Canada before the arrival of Thomas Mulcair.
Posted by Éric at 10:43:00 AM