Two federal polls conducted recently in Quebec by Forum Research and CROP indicate that the New Democrats have not only taken the lead, they are ahead by miles. 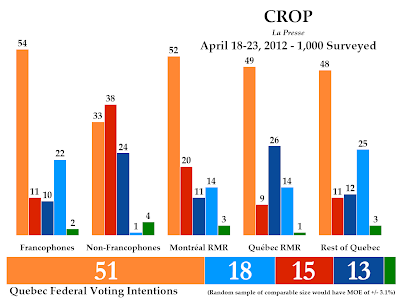 The CROP poll published by La Presse puts the NDP at a massive 51% - a gain of 22 points since CROP's last poll from mid-March.

The Bloc Québécois remains in second but with only 18% support, a drop of 10 points. The Liberals are down seven to 15% and the Conservatives are down six to 13%. Everyone has been shoved aside by Thomas Mulcair.

Interestingly, however, the gain has come almost exclusively from francophones. The NDP leads in this demographic with 54%, up 24 points since before the Mar. 24 leadership convention. The Bloc is down 11 to 22% and the Liberals and Tories have dropped seven and six points, respectively.

But among non-francophones, the NDP is only up nine points (considering the small sample size, it could even be considered to be within the MOE) and still trails the Liberals, 38% to 33%. It would appear that French Quebecers were concerned about the NDP choosing someone other than Mulcair, while English Quebecers were not nearly as worried about who would take over the helm of the party. Perhaps that is not so surprising.

The NDP leads by huge margins everywhere, with 52% in Montreal, 49% in Quebec City, and 48% in the rest of the province. In Montreal, their primary adversary is the Liberal Party (20%) while they face-off against the Tories in Quebec City (26%) and the Bloc in the regions (25%). But in every case the fight is one-sided.

With these levels of support, the New Democrats would win 66 of the province's 75 seats, a massive landslide. The Liberals would squeak by with five seats, the Tories three, and the Bloc only one.

An interesting result was on the question of who is the best option to be Prime Minister. Thomas Mulcair topped the list with 41%, well ahead of Stephen Harper (10%) and Bob Rae (9%). That a federalist like Mulcair can have such huge support despite (in CROP's polling) the Parti Québécois leading provincially is remarkable. 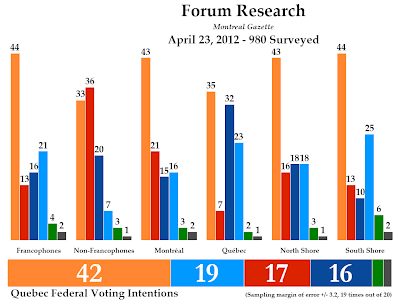 Forum's latest missive for the Montreal Gazette was taken on the last day of CROP's polling, so it is newer. Though it has the NDP a little lower, it is still showing the same landslide: 42% for the NDP, 19% for the Bloc, 17% for the Liberals, and 16% for the Conservatives.

This survey echoes CROP's quite a bit. The New Democrats are well ahead among francophones, but still trail the Liberals among non-francophones.

But nevertheless the NDP romps to 60-seat victory, with nine seats for the Liberals, five for the Tories, and one for the Bloc.

Mulcair's personal rating is also very high in Forum's polling, with his approval rating sitting at 57% to only 11% disapproval. That is the mirror image of Harper's numbers in Quebec: 22% approval to 69% disapproval. Bob Rae splits 28% to 26%, with a relatively high proportion having no opinion.

What is absolutely fascinating about these personal numbers is that Thomas Mulcair gets a 58% approval rating from supporters of the Parti Québécois. In his days as a provincial MNA, Mulcair was one of the fiercest opponents of the PQ - but now he has apparently become Quebec's defender in the House of Commons. 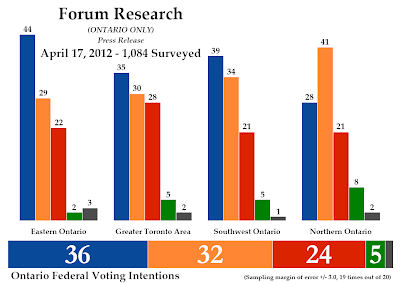 That is not the case in Ontario. In Forum's federal poll of the province, the firm found that 87% of Tim Hudak's PC support is drawn from the federal Conservatives, 79% of the provincial NDP's voters are federal NDP supporters, and 68% of Dalton McGuinty's supporters plump for the federal Liberals.

Province-wide, 36% of Ontarians support the federal Conservatives, compared to 32% supporting the NDP and 24% the Liberals.

The Conservatives lead in eastern Ontario, in the GTA as a whole (though only in the 905 area code), and in southwestern Ontario. The New Democrats are ahead in northern Ontario, while the Liberals lead in the City of Toronto.

These levels of support would deliver 61 seats to the Conservatives, 28 to the New Democrats, and 17 to the Liberals. Considering where most of the new seats are likely to be created (in the 905 area), the Tories should be able to pad that number.

But it shows that Ontario could be becoming more of a two-horse race, with the Liberals holding on to their seats in Toronto itself. It makes Ontario a battleground and, as always, an important one. If the New Democrats can maintain their huge representation in Quebec, the path to government lies in whittling down the Tory lead in Ontario.
Posted by Éric at 11:38:00 AM