Shortly after Thomas Mulcair was elected leader of the New Democrats, Forum Research conducted a poll that suggests that the Conservatives and NDP are now neck-and-neck in voting intentions. 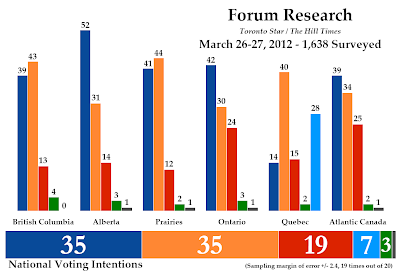 Forum was last in the field on 2 March, and since then the Conservatives have dropped only two points to 35% - a shift within the margin of error.

The same can't be said for the NDP, who are up seven points since the beginning of March. They are now at 35%. This is the Mulcair bump, but it is remarkable to see the size of the bump and where it has actually taken place.

Shunted off as a result are the Liberals, down six points to 19%, back where they were in the 2011 election. This is very dangerous for the Liberals, as Thomas Mulcair appears to have regained all of the support the NDP had lost in the last year to Bob Rae.

The Bloc Québécois is up two points to 7% while the Greens are down one point to 3%.

The honeymoon bump is strongest in the West and Quebec, as the NDP has gained over 12 points in every region. The New Democrats lead in the Prairies with 44% (+19), British Columbia with 43% (+12), and Quebec with 40% (+12). They are up 15 points in Alberta to 31% as well, an incredible high for any party that isn't Conservative. The increase in Quebec is especially important, as it saves the hide of the bulk of the NDP's caucus.

The Conservatives still rule the roost in Alberta with 52%, though that represents a drop of 17 points since the beginning of March. They have gained four points in each of Ontario (42%) and Atlantic Canada (39%), the Ontario number an important one for the Tories.

The Liberals don't manage more than 25% support anywhere, reaching that level in Atlantic Canada (-4) and 24% in Ontario (-5). 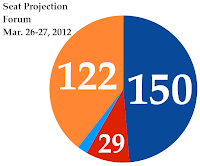 But the significant Tory lead in Ontario throws the seat results out of whack, turning a close race into a near Conservative majority. With these numbers, the Conservatives win 150 seats, five short of a majority. The New Democrats make important gains to reach 122 seats, while the Liberals are reduced to only 29. Though that gives the NDP and the Liberals the ability to out-vote the Tories, they need the Bloc's seven seats for a majority.

The Conservatives win 19 seats in British Columbia, 24 in Alberta, 12 in the Prairies, 71 in Ontario, five in Quebec, 18 in Atlantic Canada, and one in the north.

The New Democrats win 16 seats in British Columbia, four in Alberta, 14 in the Prairies, 24 in Ontario, 56 in Quebec, seven in Atlantic Canada, and one in the north.

The Liberals win one seat in British Columbia, two in the Prairies, 11 in Ontario, seven in Quebec, seven in Atlantic Canada, and one in the north.

The situation is further unbalanced by the expansion of the House to 338 seats. Though the strong NDP performance in British Columbia, Alberta, and Quebec means they can win some of the new seats, the big Conservative advantage in Ontario means they win the bulk of the seats there. In the expanded House, the Conservatives would likely win 168 seats, two short of an absolute majority, while the NDP wins 131, the Liberals 31, and the Bloc eight. The Tories' share of seats increases significantly, to 49.7% from 48.7%.

Ontario, Ontario, Ontario. It is key to the Conservatives' shot at maintaining power, and absolutely essential if the New Democrats are to replace the government. At this stage, the Conservatives have a huge leg-up in the province. Mulcair will have to whittle away Conservative support by a significant degree, as gains have fewer returns for the NDP than they might have for the Liberals.

But it could be a lot worse. A poll by Innovative Research taken just before the convention pegged NDP support at only 25% nationwide, one point up on the Liberals. The Conservatives stood 12 points ahead with 37% support.

In Ontario, Innovative put the Tories at 47% to 33% for the Liberals and only 16% for the NDP. If Mulcair has indeed bumped the New Democrats up to second place, that would be a very positive start for the party.

Innovative also put the NDP neck-and-neck with the Bloc in Quebec, a state of affairs also reported by Forum in a pre-convention poll (30% BQ to 27% NDP). But British Columbia has been relatively steady, as both a Forum poll from 19 March and the Innovative survey put the New Democrats ahead of the Tories. Mulcair seems to have improved the situation somewhat, but B.C. has been leaning NDP for some time.

The honeymoon is certainly off on the right foot for Thomas Mulcair. If he can somehow maintain these impressive levels of support in Western Canada while also being favoured in Quebec (which he has a good shot of doing, merely by being a native son), there will be plenty of time to woo Ontario. But a bump is a bump - and that means there should be some bounce back in the coming months. How much of a retreat, and where it takes place, will be something to watch. But the NDP has demonstrated how a leadership race can erase some of the problems in public opinion a party can suffer between leaders. They should keep this in mind in the run-up to the Liberal leadership race.