In the run-up to Thursday's leaders' debate, Wildrose widened its lead over the Progressive Conservatives, who in turn wiped the Liberals off the electoral map.

For a comparison of how things have shifted over the last two weeks, take a look at my article for The Globe and Mail here. 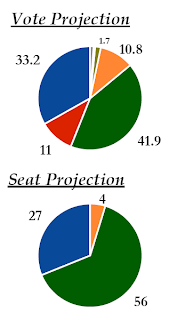 The projection was last updated in the early hours of Apr. 13, and since the previous projection of Apr. 11 the Wildrose have picked up one point to lead with 41.9%. This is the high watermark of the campaign for Danielle Smith.

The Tories, meanwhile, have dropped 0.2 points to 33.2%, almost nine points behind Wildrose.

The Liberals are down 0.1 point to 11% support, while the New Democrats are unchanged at 10.8%. For the Liberals, this is their lowest level of support in the campaign.

The net result is that Wildrose is unchanged at a projected haul of 56 seats, while the Progressive Conservatives are up one seat to 27. This has come at the expense of the Liberals, who are now projected to win zero seats. The New Democrats have held steady at four seats.

The likely range of Wildrose support has increased to between 36.6% and 47.1%, while the Tories are holding generally steady at between 30.5% and 35.9%. The two parties had overlapped since the Apr. 10 projection, but no more.

This puts the likely range for the Liberals at between zero and three seats, while the New Democrats stand to win between two and eight sits. There is a very strong likelihood that the NDP will emerge as the third party in the legislature ahead of the Liberals, who may not sit at all.

Wildrose should win between 30 and 74 seats, a range that puts the odds of a Wildrose majority strongly in their favour. The Tories stand between eight and 55 seats, which makes a PC win plausible but nevertheless unlikely.

The one region of the province keeping them in the game is Edmonton, where the Progressive Conservatives gained 1.8 points since Apr. 11. They now lead with 38.7% and have gained one seat. Wildrose is down 1.9 points to 27.3%, while the New Democrats are up 1.8 points to 16.4%.

The Liberals have dropped 0.8 points to 13.9%, shutting them out seat-wise. Though they could still potentially win three seats in the capital and take 16.9% of the vote, they are being squeezed out by the other three parties. This has been going on since Apr. 5.

The Alberta Party is down 0.7 points to 2.3%. Also note that the projection was updated to accurately reflect where candidates for the Alberta, Evergreen, and other parties are running. This has had the effect of boosting support for these parties in each riding (i.e., a party at 5% in a region with two ridings would have 5% in each, if they only run one candidate they would need to have 10% in that one riding).

In Calgary, Wildrose is up 1.5 points and two seats to 47.8% and 26 seats. They also have it within their power to sweep the city, though as many as seven Tories could survive the onslaught. The PCs are down 1.8 points to 30.5%, while the Liberals are up 1.5 points to 11.6% and the NDP down 0.2 points to 7.2%. Though this is one bit of good news for the Liberals, they are far from being within range of a single seat in the city.

The three polls added to the projection all tell somewhat different stories, one of the reasons why the likely seat and vote ranges are so wide.

ThinkHQ (Apr. 9-10, 1,223 surveyed) has Wildrose steady at 43% since their Apr. 2-3 poll, while the Tories are down one to 29% support. They generally have the parties holding firm throughout the province, though they see the parties neck-and-neck in Edmonton. Interestingly, however, ThinkHQ records that the personal impression of Wildrose has dropped significantly in the last week in Edmonton.

Abacus Data (Apr. 9-11, 900 surveyed) puts Wildrose up three points since their Apr. 2-4 poll to 46%, while the Tories are down two to 29%. They show big Wildrose gains in Calgary and a big PC drop in the rest of Alberta, while giving the Tories a seven point (and increasing) edge in Edmonton.

Finally, Campaign Research (Apr. 11, 894 surveyed) has Wildrose down 2.7 points since their Apr. 3 poll to 42.8%, while the Tories are up six points to 34.4% support. They show general stability in Calgary and the rest of Alberta, but a big Tory leap in Edmonton, where they hold a 22-point lead over Wildrose.

If there is a trend to be seen in these polls, it is that the fortunes are improving for the Progressive Conservatives in Edmonton, but that they trail by significant (insurmountable?) margins in Calgary and the rest of Alberta. This is, of course, reflected in the projection.

Did the debate change anything? What about Peter Lougheed's public endorsement of Alison Redford? We shall soon find out. A poll by Return on Insight out today shows a somewhat closer race between the Tories and Wildrose, however the firm had no other poll out during the campaign with which to compare trends. But with such a wide gap between the two frontrunners, the best Redford might be able to hope for is a minority - headed by Danielle Smith.
Posted by Éric at 10:24:00 AM