Wildrose is still on track to win a strong majority in Alberta's provincial election, but the margin between it and the governing Progressive Conservatives has narrowed over the past week. 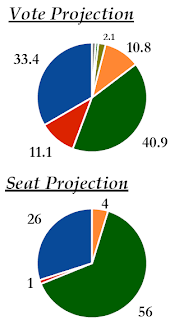 Though the projection was updated yesterday afternoon to reflect the latest Léger Marketing poll, it is more helpful to compare today's update (which also includes the new Forum survey) to that of Apr. 5, when a batch of polls were added to the projection model. This allows us to contrast the changes in the aggregate rather than how the individual Léger and Forum polls have shifted the projection back and forth.

Due to this shrinking gap, Wildrose is now projected to win 56 seats, down two since before the Easter weekend. The Progressive Conservatives are up two seats to 26, while the New Democrats are unchanged with four seats and the Liberals with one.

The Liberals would take between 9.6% and 12.6% of the vote if an election were held today, while the New Democrats sit between 9.2% and 12.4%. The Alberta Party would likely receive the support of between 1.4% and 2.8% of Albertans.

This wider range of outcomes means a wider range of likely seat wins: Wildrose would win between 33 and 76 seats if an election were held today, compared to between 9 and 52 seats for the Tories. This runs the gamut between PC disaster to majority, though anyway you slice it Wildrose is poised to make historic gains. Of course, something near the projected result is the most likely, so the chances of the Progressive Conservatives forming a majority government or being reduced to single digits are quite low.

Almost all of these Liberal and NDP seats are expected to come in Edmonton, where the two parties are neck-and-neck in the battle for third place. The Liberals have the inside track, but have lost one point since Apr. 5 and now sit at 14.7% support. The New Democrats are down 1.2 points to 14.6%, while the Alberta Party is down 0.4 points to 3%. All three parties are well behind the Tories and Wildrose. The PCs are up a point to 36.9% while Wildrose is up 1.4 points to 29.2%, though their likely ranges overlap a little: 33% to 40.7% for the Tories and 24.7% to 33.7% for Wildrose.

The best piece of news for the Progressive Conservatives, however, is in Calgary. They have gained 1.9 points and two seats since Apr. 5, though they still trail Wildrose with only 32.3% support. But it is a reversal of a slow decline in the city, as the chart to the left shows.

Wildrose is up 0.9 points to 46.3% and is projected to win 24 seats. After the blip that was caused by the Léger poll, Wildrose is back to making gains in Calgary.

The Liberals, however, are down significantly. Since Apr. 5, they have slipped 2.9 points to only 10.1% support. Note that the Liberals took  32.7% of the vote in the city in 2008. That is a remarkable collapse for the party.

The New Democrats, however, are up 0.2 points in Calgary. They are out of the race in the city, though, as they have only 7.4% support.

That betters their 6.5% support in the rest of Alberta, a drop of 1.1 points since Apr. 5. Wildrose leads here with 52.5% support, a gain of 0.9 points. The Tories are down 0.3 points to 29.9% while the Liberals are treading water, picking up 0.1 point to reach 7.1% support. The Alberta Party is up 0.3 points outside the two main cities and are projected to have the support of 2.1% of voters in this region. 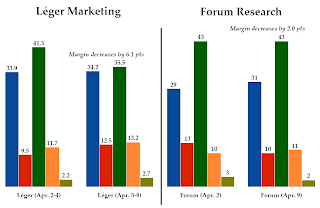 The two polls that have come out so far this week are somewhat divergent, and this is the main reason why the projection ranges are currently so wide. Léger polled over the Easter weekend, and found that the margin between Wildrose and the PCs had shrunk by 6.1 points. Wildrose slipped 5.8 points since their poll of Apr. 2-4 to 35.5% while the Tories gained 0.3 points to reach 34.2% support.

Forum's poll, conducted on Monday, instead found the gap between the two parties to still be very wide: 12 points. Wildrose's support (43%) was unchanged from the Apr. 2 poll, but the Tories picked up two points to hit 31%. The numbers and margin might be quite different (as are the methodologies used, the number of Albertans surveyed, and the field dates), but these two polls do seem to indicate that the race is tightening up.

This is, perhaps, not too surprising. Wildrose stormed ahead early in the campaign, and now that Albertans are paying more attention to their policies and candidates there is a bit of blow back. Both Léger and Forum showed that some of the key campaign promises of Wildrose are not very popular, and this kind of momentum was never going to be sustainable.

I expect that the gap will continue to narrow in the coming days, making tomorrow night's debate all the more important. Danielle Smith can solidify her lead with a good performance, or she can lose that lead by allowing Alison Redford to define her and her party as unprepared for office. How Brian Mason and Raj Sherman, the NDP and Liberal leaders, will treat the two frontrunners could also be a factor. If they focus on Smith, they might push her fence-sitting voters over to the Tories. If they focus on Redford, she will have to spend part of the debate defending herself rather than going after Smith. It should be interesting to see how it plays out, and how the numbers move over the weekend.

Note: The riding-by-riding projections can be accessed by clicking on the "Alberta Riding Projections" banner at the top of this page, while full regional breakdowns can be accessed by clicking on "Regional Vote and Seat Projections" in the right-hand column. You can also check out which polls are included in the projection and their relative weight by scrolling to the bottom of this page. These features are unavailable on the mobile version of the site.
Posted by Éric at 10:37:00 AM